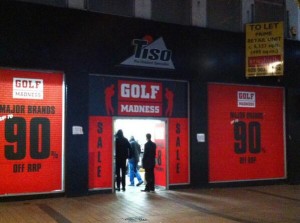 The Golf Centre shop in Belfast’s Cornmarket targeted with firebomb

POLICE have put hospitals on alert after the man behind an incendiary attack in Belfast fled the scene “in flames”.

The suspect walked into the Golf Centre store in Cornmarket on Monday evening with the device.

However, the shop owners say his clothing was already alight when he walked in.

Now police believe the dissident terror bomber is likely to have been injured and could need hospital treatment.

The Mater Hospital in north Belfast and the Royal Victoria Hospital in west Belfast have been alerted by police to anyone presenting themselves with burns injuries to contact them immediately.

The attack has been condemned by politicians.

One MLA has branded those behind Monday night’s bid to firebomb a Belfast City Centre store have been branded as “evil”.

And Stewart Dickson of the Alliance Party tweeted: “Evil, evil, evil, the only way to describe the incendiary bombers.

“No way will you succeed.” 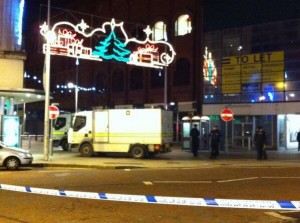 The selfless worker noticed the device was left already ignited in the Golf Centre store and carried it out before any serious damage could be caused.

No staff members were injured in the attack.

The area was closed off as Army technical officers examined the scene.

The security cordon has now been lifted and detectives are now trawling through CCTV images from the shop the area’s PSNI camera system to try and trace the bomber.


5 Responses to BREAKING NEWS…..HOSPITALS ON ALERT OVER ‘INJURED’ BELFAST FIREBOMBER