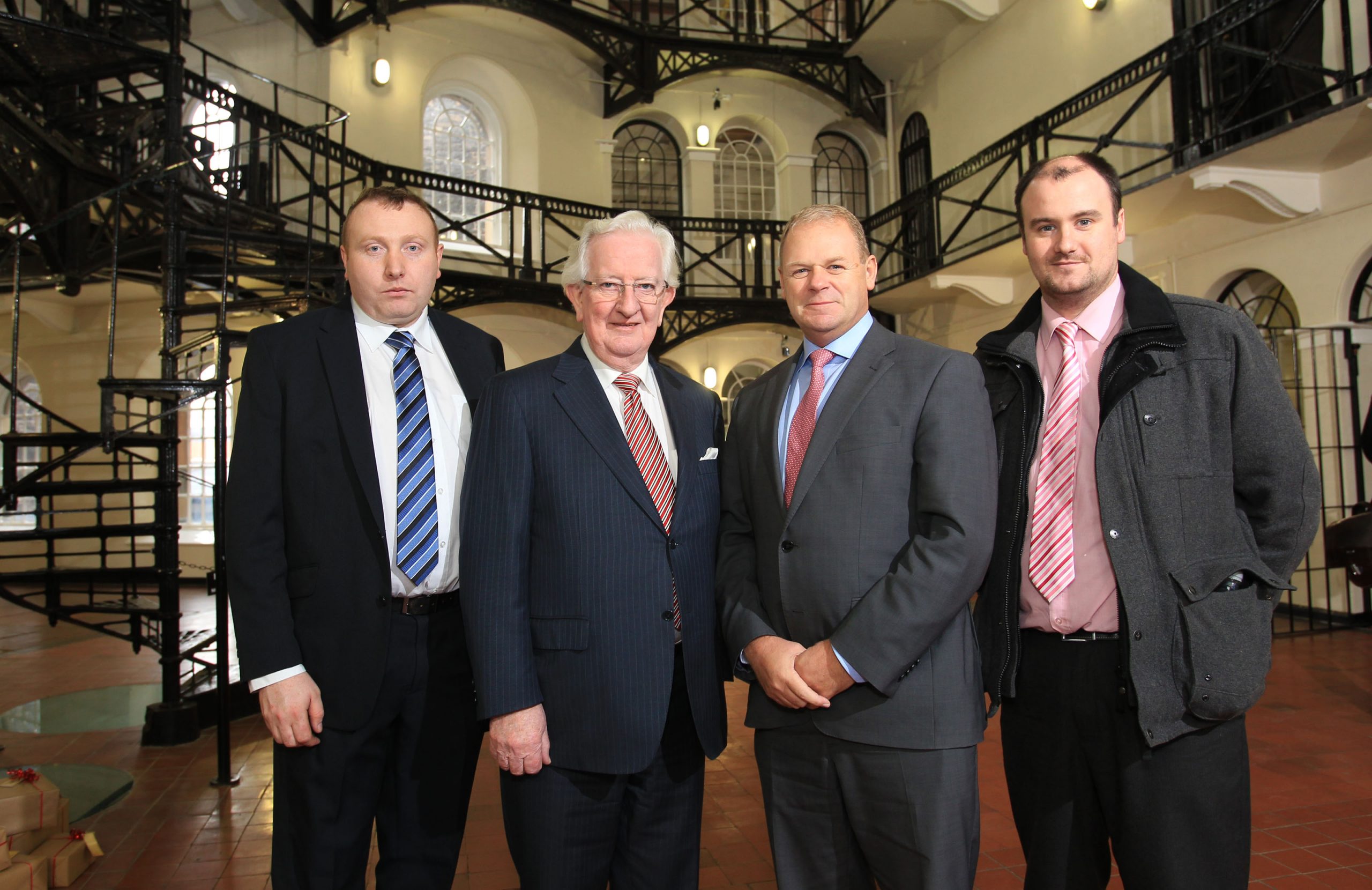 Crumlin Road Gaol, Belfast celebrates its First Anniversary today, Thursday 5th December 2013. The North Belfast Visitor Attraction & Conference centre re-opened its doors to the public one year ago today and has since become one of the most popular attractions to visit in Belfast.
It has been a successful year for the tourist attraction which has proven its capabilities and established itself to be both a multifaceted venue as well as a must-see historic landmark for tourists to Northern Ireland. The Gaol exceeded its forecasted annual visitor numbers in advance by welcoming the 100,000th visitor in October this year and is continuing to exceed these targets with 130,000 visitors to date and welcomes further growth and expansion in 2014.
Board members from Tourism Ireland were present for the occasion and to mark the first anniversary. Speaking at the event this morning, Kieran Quinn, Managing Director of Crumlin Road Gaol said,? “It has been a fantastic first year for the Gaol, and it is wonderful to have exceeded our initial expectations. We’re thrilled to have welcomed visitors from all over the world.” he added, “It is great to see such a tremendous interest from those closer to home and within the Belfast area. We would like to take this opportunity to thank everyone for their continued support and look forward to 2014.”
Throughout the year the Gaol has been host to a vast range of high profile corporate events and visits. Highlights of the year includes, the Gaol being selected as the chosen location to host the launch of the popular Game of Thrones Exhibition to the worlds media in June. At Halloween it showcased a sold out two weeks of events including the popular Paranormal Tours and Jail of Horror Scare Attraction which seen over 20,000 visitors over the Halloween period.
Crumlin Road Gaol, known to visitors as ‘The Crum’ was built in 1845 and closed as a working prison in 1996. Today the public can take a guided tour of the prison and visit The Circle, C-Wing, the Condemned Mans Cell and the famous Tunnel leading to the Crumlin Road Courthouse and hear the history of the prison and about its past inmates over the years.
-ENDS-
For further information:
Joanna Quinn?PR & Marketing Executive ?Crumlin Road Gaol?T: +44 (0)28 9074 1500?E: joanna.quinn@crumlinroadgaol.com

Notes to editor
• History – The Crumlin Road Gaol dates back to 1845 and closed its doors as a working prison in 1996. After extensive renovations the gaol has re- opened as a visitor attraction and conference centre. Today you can take a guided tour of the prison and hear about the history of the site from when women and children were held within its walls through to the political segregation of republican and loyalist prisoners and learn about why the decision was taken to close the prison.
• Daily Guided tours- run every day between 10am and 4.30pm
• The state-of-the-art conferencing and hospitality facilities at the Gaol include the main Lanyon conference suite, which can accommodate up to 280 delegates, with a gallery that accommodates an additional 30 delegates. The Forbes boardroom, Governor’s Corridor, Pierpoint Room, Circle and ‘C Wing’ and the ‘Tunnel’ are all available, along with the IT Suite, education room and several comfortable breakout rooms and reception areas. The exercise yards can also accommodate several hundred in marquees or open air.?