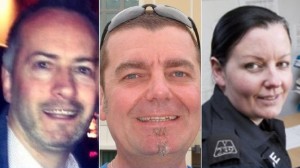 THREE of the eight people who died when a police helicopter crashed into a busy Glasgow pub have been named.

Gary Arthur, 48, from the Paisley area, was named by Police Scotland as one of the people who died in The Clutha bar on Friday night.

It is being reported locally two of the people killed in the crash were the helicopter’s pilot David Traill, 51, and police officer Kirsty Nelis, 36.

Three people in the helicopter died when it hit the bar at about 22:25 GMT. Five people inside the pub also died.

Police Scotland said that following the recovery of Mr Arthur on Saturday, the body of another person was removed from the scene at 11:00

The body has been taken to the Southern General Hospital, where the formal process of identification will continue.

“Our casualty bureau has already handled more than 600 calls and we are working hard to piece together information that will allow us to progress that.”

She added: “Until we remove the helicopter we cannot be sure what we will find. We continue to recover, as I have said, from the scene.”

Of the 32 people who were injured in the crash, 12 remain in hospital. Three of these casualties are being treated in intensive care where their conditions are described as serious but stable.

Emergency services have started to remove the remains of the helicopter. Sections of the rotor blade were hoisted away from the roof at about 10:30.

On Saturday night, Police Scotland said in a statement that the body of Mr Arthur had been recovered.

Mr Arthur’s daughter Chloe, 18, who has played for the Scotland women’s football team and for Celtic women, took to Twitter to thank everyone for their kind thoughts and to pledge that she would make her much-loved father proud.

The under-19 forward for Celtic and Scotland tweeted: “RIP dad. you’ll always mean the world to me, I promise to do you proud, I love you with all my heart.

“Thanks to everyone who has tweeted me, text me etc, means so much, I have the most amazing friends ever.”

Mr Arthur was a regular on the sidelines watching his daughter play at matches, according to Celtic women’s manager David Haley.

He said: “It is a tragedy that Chloe’s father was one of eight innocent victims in this terrible accident – he was regularly seen at Celtic matches, watching his daughter.

“Chloe and her family have the full support of everyone at Celtic and across the women’s game at this very sad time.”

A minute’s silence will be held before Celtic’s Scottish Cup tie against Hearts at Tynecastle.’Beautiful friend’

Social network tributes have been paid to the other victims.

Many of Mrs Nelis’s friends changed their profile pictures to a black square cut across by a thin blue line in remembrance.

Andrina Romano said: “For my beautiful friend Kirsty and all others involved. You will never be forgotten and I will miss you every day. RIP.”

Brian Docherty, chairman of the Scottish Police Federation, told BBC Radio Scotland the process of identifying and officially naming victims was taking time because it was a “very difficult balancing act”.

He said: “There are formal identification processes to follow, so unfortunately we have to make sure we follow due process or we could leave ourselves being criticised very heavily by the families who have unfortunately lost a loved one in this incident.” 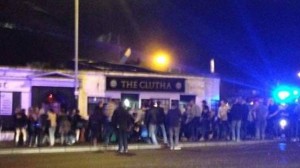 Aviation expert Chris Yates said that ater the helicopter was lifted it would be moved to a secure site for detailed investigation.

Ms Sturgeon said: “It was a very moving service, a very poignant service. I think it was important that the service took place this morning.

“Everybody in Glasgow wants to do something to let those who’ve been most directly affected by this tragedy know that we’re thinking of them and that although we can’t begin to imagine the grief and loss that they’re suffering, they’re not alone.”

Meanwhile, officers from Police Scotland’s major investigations team have asked for any footage of the incident to be emailed to: glasgowhelicopterincident@scotland.pnn.police.uk

“I think, along with their colleagues in the ambulance and heath service, everyone knows and understands just how magnificent that response has been,” he said.

In a separate inquiry, the Air Accidents Investigation Branch (AAIB) will try to establish what caused the crash.

Its team will be assisted by experts from Eurocopter, which manufactured the EC135 T2 aircraft.

Prof Graham Braithwaite, an air accident expert at Cranfield University, said the crash investigation could take more than a year.

He said: “If it’s the Air Accidents Investigation Branch investigation then they’re doing it, not to allocate blame or liability, but to try to find out how to make these aircraft safer in the future, so that can take many months.”

David Learmount, from the aviation news website, Flight Global, said the crash looked likely to have been caused by a mechanical failure.

“We can deduce a fair amount about the nature of the problem that the pilot faced by the fact that this aircraft ended up hitting a pub,” he said.

“If the pilot had had any control at all, he would have aimed it away from a building.”

Helicopter operator Bond Air Services will assist Police Scotland and the AAIB with their investigations.

The Clutha, in Stockwell Street by the River Clyde, was packed with about 120 people listening to live music when the helicopter crashed on to the roof.

Eyewitnesses outside described how the aircraft “fell like a stone”.

Others described people working together to get out of the pub aided by others who were in the area.

Efforts continue to help survivors and the bereaved.

Glasgow City Council is operating a family reception centre, at 40 John Street, to help those affected.

The authority has also opened a book of condolence for people to sign at the City Chambers.

Elsewhere, flags are flying at half-mast across the city and on Scottish government buildings.