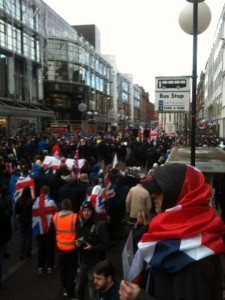 A LOYALIST protest parade through Belfast City Centre passed off peacefully at lunchtime.

But the organisers could face prosecution after the march failed to leave Belfast City Hall on time.

The protest left from Belfast City Hall around 1 pm.

The protesters have breached a determination by the Parades Commission that they leave the city hall by 12 midday.

Police put electronic signs saying the protest stating that the parade was now in breach of the Commission’s determination and they could face prosecution.

The march comes days ahead of the first anniversary of the council’s decision to restrict the flying of the union flag to designated days.

The parade was organised by a group calling itself the Loyalist Peaceful Protestors.