A report into corrupt garda officers who allegedly assisted the IRA murder two RUC officers along the border is expected to go to the Irish parliament today.

Chief Supt Harry Breen and Supt Bob Buchanan were killed in March 1989 in south Armagh when they were ambushed by an IRA gang.

The Smithwick inquiry was established in 2005 but public hearings did not begin until 2011.

It is understood Judge Peter Smithwick’s report will be debated by the Irish cabinet.

It will be eventually published, by being placed in its library.

In 2003, Canadian judge Peter Cory recommended that a tribunal should be set up to examine whether or not there was any collusion in the murders of the two most senior RUC officers killed during the Troubles.

In June, the PSNI has come under attack at the tribunal in Dublin which is investigating allegations of Garda collusion in the IRA murders of two senior RUC officers

The scathing public attack could damage relations between the two police forces after years of developing close co-operation on cross-border such as dissident terrorism and organised crime.

A public inquiry into the murders has been examining allegations of Garda collusion with the IRA’s ruthless north Lough/south Armagh brigade which was headed up at the time by prolific smuggler Tom ‘Slab’ Murphy.

Counsel for the Garda said no intelligence at the time had suggested that any Garda mole had passed on information that led to the 1989 murders.

Diarmaid McGuinness said: “The claims made by Mr Harris were worthless and cast the gravest shadow over the ability of the PSNI to co-operate with this inquiry.”

He rejected the collusion claims as “nonsense on stilts” adding that the PSNI had failed gardai, the tribunal and the men’s families by not sharing evidence.

He said: “You, chairman, are now faced, 24 years after the murder, with the Niagara of intelligence which is said to exist with the ACC swearing that this is all accurate.”

Earlier Mark Robinson, for the PSNI, insisted the force has done everything possible to co-operate with the tribunal – and maintained that Mr Harris told the tribunal there was no RUC intelligence at the time of the murders to suggest collusion.

The tribunal has looked into claims that three former garda officers – Owen Corrigan, Leo Colton and Finbarr Hickey – were involved with collusion. They strongly deny it.

Around 200 witnesses have given evidence before Judge Smithwick over 133 days.

Mr McGuinness said ACC Harris was paraded before the tribunal with his rank to give weight to what he had to say.

However, he said the intelligence had been withheld and could not be checked even though the PSNI had promised to share it with the Garda. He said they had not done so.

The lawyer told the retired judge that he, Judge Smithwick, was “old enough and wise enough to see through all of this”.

The murders of the two RUC officers in south Armagh, after they had left a meeting with Irish police in Dundalk, County Louth, have cast a long shadow.

Speculation that a garda mole had been involved was quickly denied. 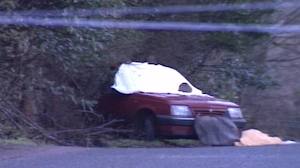 At the time, the then Garda Commissioner Eugene Crowley said: “I absolutely and positively reject any suggestion of that kind.”

And his counterpart north of the Irish border, the then RUC Chief Constable Sir John Hermon, added: “There was no mole and we would ask that this be discounted very firmly and very quickly.”

But for decades the speculation persisted.

When the Smithwick Tribunal was finally established in 2005, the families were relieved that those suspicions could be examined.

Over 200 witnesses have testified, including former IRA members and spies in the British security services.

Many allegations were made, some centring on former Garda sergeant Owen Corrigan.

He denied collaborating with the IRA, despite one RUC intelligence document that said he passed on information.

Owen Corrigan said during his recent evidence that the two senior RUC officers were “the authors of their own misfortune” when they were shot dead in an IRA ambush 23 years ago.

Owen Corrigan denied to the tribunal in Dublin that there was any leak from Dundalk Garda station that led to the killing of the men.

Instead, he insisted paramilitaries had carried out an intense surveillance operation on their movements.

The retired garda said the pair had travelled “willy nilly” without protection.

“It’s a terrible thing to say… they were the authors of their own misfortune,” he told Mr Justice Peter Smithwick.

Mr Corrigan, who was based at Dundalk Garda station when the men were murdered, denied allegations there was a leak from the station.

In a heated exchange with lawyers, he insisted he got intelligence from the IRA after “the fateful day” that tallied with evidence the IRA gave to the tribunal, that the senior RUC men had been watched for six months.

He said it was “absolutely insulting” to him that after so many years of service, and 18 days of answering questions in bad health, that he was being linked with the case.

“This is a trial of the life and times of Owen Corrigan,” he said, as he threatened not to return to the witness box tomorrow.

“We are bending to the British.

“We are doing their work for them.”

Mr Corrigan claims British security services tried to frame An Garda Siochana – by using Jeffrey Donaldson MP to name him under parliamentary privilege in the UK’s Houses of Parliament – to distract attention from their own collusion.

He told the tribunal he was refusing to hand over any more details of his bank accounts, as requested, as no other witness had been asked such personal details.

“I thought about it when lying on my death bed in hospital and I thought if I ever recover I didn’t want any more to do with it,” he said of the tribunal


2 Responses to GARDA COLLUSION REPORT INTO RUC MURDERS DUE TODAY