BT JOBS BOOST FOR BELFAST DESPITE THE BOMBERS 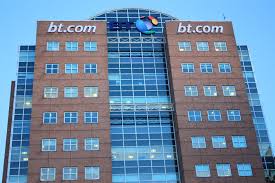 BRITISH Telecom (BT) is to create 165 jobs in Belfast at a new customer service centre.

The company said the posts would support its operations across the UK as required.

The latest expansion in its Belfast-based workforce has been supported by both Invest NI and the Department for Employment and Learning (DEL).

In December last year, the firm announced 100 new posts at the opening of a customer service centre at Riverside Tower in Belfast.

The new customer service centre will be based in the same building.

The company said the new jobs will be “multi-skilled service advisors who can work across any part of BT that requires additional resource for short-term campaigns”.

BT NI chief executive Colm O’Neill: “Our first BT Flex centre located in BT’s Riverside Tower has been a great success and we are delighted that BT Group has chosen to expand our operation at this location to meet our growing demand for skilled and experienced advisers.”