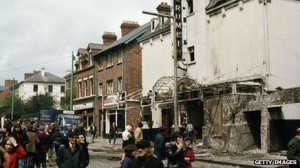 A BBC Panorama investigation will tonight reveal that members of a secret military undercover unit “at times” operated outside the law and even shot unarmed IRA suspects.

The programme – entitled ‘Britain’s Secret Terror Force’ – will reveal details of the activities of the covert unit for the first time.

The unit was called the Military Reaction Force (MRF).

Panorama also reveals that there were several ‘drive by’ shootings carried out by MRF soldiers, in which people were killed and wounded – even though there is no independent evidence that any of them were armed or were members of the IRA.

This secret unit had around 40 men hand-picked from across the British Army.

They carried out round the clock patrols of West Belfast, heartland of the IRA, in unmarked cars. They addressed each other by first name and dispensed with ranks and dog tags.

Another former MRF soldier said part of his mission was “…to draw out the IRA and minimise their activities” adding “…if they needed shooting they’d be shot.”

Panorama interviewed seven former members of the MRF and three appear on camera, albeit anonymously.

All seven former MRF soldiers acknowledged that they sometimes acted in contravention of the ‘Yellow Card’ – the strict rules carried by every soldier, which spelt out the circumstances under which they could open fire and stay within the law. Generally, lethal force was only lawful when the lives of security forces or others were in immediate danger.

However, another MRF soldier explained: “If you had a player who was a well-known shooter who carried out quite a lot of assassinations…it would have been very simple, he had to be taken out.”

All the soldiers we spoke to said they believed the ‘Yellow Card’ did not apply to them and one described it as a “fuzzy red line” – which meant they acted as they saw fit.

Some of the soldiers said they would shoot their ‘targets’ even if they were unarmed. None would go into detail about specific incidents they or their colleagues were involved in. Nor is it known how many people they shot. The MRF’s records have been destroyed.

All the soldiers denied that they were part of a “death” or “assassination squad”.

On occasion, a sergeant in the MRF went on patrol armed with a Thompson sub machine gun which was not a standard army weapon and one favoured by the IRA.

Tony Le Tissier, a Major in the Royal Military Police, told Panorama: “They were playing at being bandits, they were meant to be sort of IRA outlaws. That’s why they were in plain clothes, operating plain vehicles and using a Thompson Sub machine gun”.

One MRF soldier told the programme that a Thompson was “the weapon of choice” for Royal Military Policeman, Sergeant Clive Williams, who was an MRF patrol commander:

“He (Williams) liked it. It was powerful, it had knockdown power. And it was a weapon that was associated with the terror groups – it was part of the disguise, it was perfect.”

Some of the soldiers said they would also ‘drive by’ barricades manned by nationalists in West Belfast and open fire. One said this would happen even if they did not see anyone brandishing a firearm.

On 12 May 1972, Williams was part of a two car MRF patrol that opened fire on two separate barricades wounding five men and killing Patrick McVeigh, a father of six children, and a member of the Catholic Ex Servicemen’s Club. Four of the victims had been manning barricades and two, including McVeigh were passers-by.

The MRF soldiers who opened fire claimed they’d been confronted by gunmen at the barricades. However, there is no evidence that any of them were members of the IRA and all six tested negative when swabbed by the police for firearms deposit.

Six weeks later Williams was involved in another ‘drive by’ shooting, at the Glen Road bus terminus. Four men were shot and again tested negative for firearms deposit, consistent with eye witness evidence that none of them was armed.

One of the victims, Hugh Kenny, said he still suffers lasting pain from his spine and legs.

“I didn’t really hear any shooting, I sort of smelt it. I got this lightness, I thought I was shot in the head…and then I just collapsed.”

When RUC detectives inspected Sergeant Williams’ vehicle, they suspected he’d smashed the rear window to make it look as if he’d come under fire.

Declassified documents from the National Archives show how concerned Whitehall was to prevent details of the unit being made public.

One document read: “There can be no useful purpose in admitting the existence of any such organisation” and “There seems to be considerable advantage in maintaining as much confusion as possible”.

After a three day trial, during which several witnesses weren’t called in person to give evidence, Williams was acquitted on all counts by a majority verdict.

But Panorama says it has discovered there were a number of things the jury weren’t told, including the fact that Williams had lied to the police in his early statements by saying the weapon he had fired was a standard army issue Sterling sub machine gun.

The jury also were not told that the Thompson sub machine gun used by Williams belonged to Captain Hamish McGregor who was about to take command of the MRF. It had come with him when he was posted to Belfast and was kept in the MRF armoury. He told Panorama that the Thompson was only there to be used for training.

In a fourth MRF shooting investigated by Panorama, 18 year old Daniel Rooney was killed and his friend wounded. The soldiers told the police they were armed, but forensic tests again indicated this was not so.

Relatives of the MRF’s victims told Panorama that 40 years on, they are still seeking answers from the archives.

Case files of 3260 deaths during ‘The Troubles’ are being reviewed by former detectives in the Historical Enquiries Team in Northern Ireland, as part of the peace process.

It is against this backdrop and Lord Saville’s finding that soldiers had shot unarmed civilians on Bloody Sunday in February 1972 that Panorama investigated the activities of the MRF.

Patrick McVeigh’s daughter Patricia said: “We want the truth. We don’t want to stop until we get the truth.”

The MRF soldiers told Panorama they agreed to be interviewed because they believe their role in the fight against the IRA has gone unrecognised.

The MOD told Panorama that it intends to refer the programme’s disclosures about unlawful shootings to the police in Northern Ireland for further investigation.