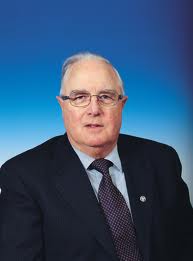 THE funeral will take place this Thursday for former SDLP MP Eddie McGrady.

The 78-year-old died at 4 pm on Monday in the Downe Hospital in Downpatrick, Co Down following a lengthy battle with illness.

The town is expected to come to a standstill as friends, family, constituents and politicians from across the political spectrum come to pay their respects to Mr McGrady who was known affectionately as ‘EK’.

His remains will leave his home in Downpatrick at 9.15 am to travel to St Patrick’s Catholic Church in St Patrick’s Avenue for 10 am Requiem Mass.

Mr McGrady will be buried in St Patrick’s Cemetery in Saul.

The father-of-three widower had been in politics since 1961.

He became south Down MP in 1987 after wrestling the seat from the Ulster Unionist’s Enoch Powell.

For the next 33 years, he represented the south Down constituency at Westminster and stepped down in 2010.

Margaret Ritchie, who once worked in Mr McGrady’s constituency office, reclaimed the seat in 2010 for the SDLP.