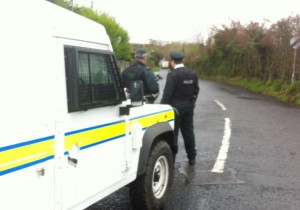 POLICE in Derry are investigating a report of suspicious activity in the Creggan area of the city.

A PSNI spokesperson appealed to anyone who saw a gold coloured Toyota Avensis car driving in the Dunmore Gardens area around 8.50am to contact detectives at Strand Road police station on 0845 600 8000.

The spokesperson added if someone would prefer to provide information without giving their details they could contact the independent charity Crimestoppers and speak to them anonymously on 0800 555 111.

The police appeal comes less than 24 hours after a major search operation carried out in the Whitehouse Road area yesterday.

Police said that operation followed a report of suspicious activity in that area.

A number of roads in the area, including a section of the main Derry to Buncrana road, were sealed for a period.

Nothing was found and police advised anyone who came across anything suspicious to contact them immediately.


One Response to POLICE PROBE SUSPICIOUS ACTIVITY IN CREGGAN