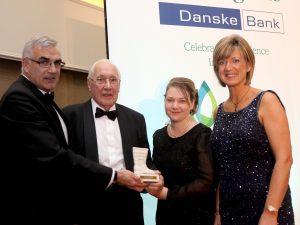 “We were honoured to present the award to John in recognition of his dedication and commitment to the Northern Ireland Limousin Cattle Club over a period of 32 years.

“John served the organisation in roles such as secretary, treasurer and club president and was always willing to help offer advice as well as raise funds for charity.”

Simple Power Chief Executive Philip Rainey continued: “We are extremely proud to have been associated with this important award for Unsung Hero again this year.

“We believe the Awards are an excellent opportunity to recognise, reward and honour the many talented people within the farming industry with whom we work with so closely.

“The Unsung Hero Award is especially important to us as it shines a much-needed spotlight on individuals whose exceptional efforts are helping to make Northern Ireland’s farming community what it is today.”

Simple Power works in partnership with farmers and landowners across Northern Ireland and plans to develop a minimum of 200 single wind turbines of 250kW over the next four years.

It’s approach helps to boost farm incomes and the also the risk out of investing in wind energy for farmers by handling the whole process from site assessment and planning through to construction and grid connection.

The landowner receives a guaranteed income for a minimum of 20 years. The company’s first two turbines were launched by the Northern Ireland Environment Minister in County Antrim.

In addition to the 2013 Farming Life Awards, Simple Power actively supports the farming community via key partnerships with Rural Support, the Young Farmers Clubs of Ulster and the Farm Safety Partnership.