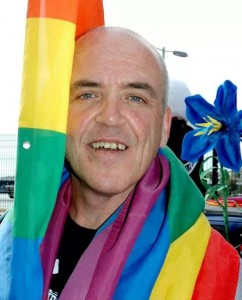 TRIBUTES have been paid to leading gay rights campaigner Sean Morrin who has died suddenly.

Mr Morrin, from Derry, was well-known throughout Northern Ireland as a member of the Rainbow Project, set up in 1994 by a group of volunteers who were concerned about the spread of HIV within the gay male population of Northern Ireland.

Members of the Rainbow Project said they were saddened by the loss of their 48-year-old friend and colleague who founded Foyle Pride.

A message of the group’s Facebook page said: “Sean dedicated a large part of his life to campaigning for and supporting the LGBT community in Northern Ireland – he was a hero and a giant and we will miss him greatly.”

Sinn Fein MLA Martina Anderson said she was “shocked and saddened” to hear the news of Sean’s passing.

She added: “I have worked with Seán over many years in regards to his role in the Rainbow Project and hosted events at the Assembly . He was a tireless campaigner for equality, human rights and the most marginalised in our community.I would like to pass on my sympathy to his family and friends at this time they are in our thoughts and prayers.

SDLP MLA Pat Ramsey said he was “shocked” and “saddened” by Sean’s death and paid tribute to his “sterling” work with the Rainbow Project.

Mr Ramsey said: “I would like to offer my sincere sympathy to the family and friends of Sean Morrin. For many years across these islands Sean championed the many human rights issues affected, in particular, by the gay and lesbian communities, showing leadership, dedication and compassion for so many.

“Sean will leave a legacy of genuine passion and enabling others to challenge injustice and bigotry and making a very positive contribution to community life.”

The Foyle branch of the public services UNISON said it was “with great sadness” that they learned of Sean’s sudden death.

A spokesperson said: “Seán Morrin was our first LGB&T member in UNISON in Northern Ireland. He helped so many people when they needed it in a quiet and respectful way. His effervescence will continue to shine through the people who knew and loved him. Unison Foyle Branch

“Sean was tireless campaigner for LGB&T people, a founding member of Foyle Pride, both a staff member and volunteer with The Rainbow Project and a great advocate for UNISON. He also did an awful lot with the Rainbow Rehoming Centre to help rehome dogs and cats. His smile and enthusiasm will be greatly missed.”

As a health organisation the Rainbow Project works to improve the physical, mental and emotional health and well-being of lesbian, gay, bisexual and/or transgender people in Northern Ireland.