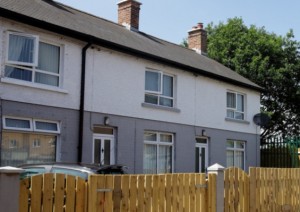 Michelle Owens charged with the murder of her son Brendan Owens’ at their family home in Trinity Terrace, Lisburn, Co Antrim

A MOTHER has faced a court on Friday charged with the murder of her toddler son.

She was remanded in custody to the women’s unit at Hydebank Wood jail to appear in court on October 7 via video link after no bail application was made by her defence team.

On Thursday, a 51-year-old man was arrested as part of the murder inquiry.