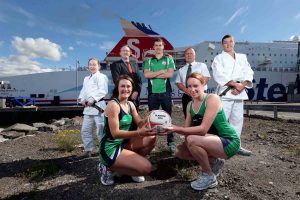 THE Irish Sea’s leading ferry company is backing Northern Ireland’s elite athletes to secure a place at next year’s Commonwealth Games in Glasgow.

Stena Line has flexed its muscle by announcing sponsorship of the Northern Ireland Commonwealth Games Team which will see the ferry giant transport athletes between Belfast and Cairnryan over the coming months as they utilise the various arenas and stadiums in Glasgow for training and competition.

Sports stars from the disciplines of boxing to athletics and swimming to martial arts are competing for a place at the Glasgow Games in 2014 and the ferry partnership will provide major support for team Northern Ireland to give them their best chance of securing a place.

“We want to give the Northern Ireland athletes every opportunity to fulfill their dreams in Glasgow and with Stena Line’s sponsorship they will be able to travel to and from Scotland for free on our Superfast ferries,” Neil continued.

“I would like to wish all of our athletes travelling to Glasgow the best of luck, particularly the Northern Ireland netball team as this will be their first time competing in the Commonwealth Games.

“We’ll be supporting Team NI to go all the way and we hope to transport them home next summer with a plethora of medals!” he added.

Conal Heatley, Executive Officer of the Northern Ireland Commonwealth Games Council, said: “With this support from Stena, our athletes will be able to avail of more high level training and competition opportunities in GB.

“We have already seen cyclists, shooters, triathletes, judo players and wrestlers using the service. They are able to travel in comfort with the capacity to bring all their relevant kit and equipment. The frequency of service also offers flexibility to fit the athletes’ schedules,” he continued.

“Our Games Management Team will also be making regular trips to Glasgow as they ensure that the support provided to the athletes and coaches is maximised,” Conal added.