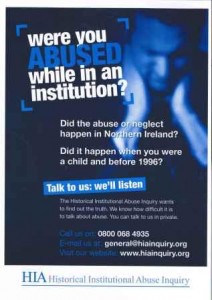 MEMBERS of the Historical Institutional Abuse Inquiry are to head to Australia this month to take statements from alleged victims.

Two homes run by the Sisters of Nazareth in Londonderry will be the focus of the first public hearings of the HIAI next year.

The allegations of abuse, centred on St Joseph’s Home, Termonbacca, and Nazareth House Children’s Home in Bishop Street, will be considered in January.

HIAI members plan a further visit to Australia next year to take statements from victims of alleged abuse at other institutions.

It was revealed last month that 57 of the 355 individuals who want to speak to the inquiry to date are from Australia.

The inquiry, headed up by former High Court judge Sir Anthony Hart, is examining the extent of child abuse in the Catholic church and state-run institutions in Ulster.

He held his third public hearing yesterday during which he announced details of the trips down under.

A report on its findings is expected to be given to the Stormont Executive in 2016.

The inquiry said it reserves the right to re-open investigations into those institutions if more evidence is brought forward.

It is also looking at the possibility of adding other institutions to its investigation list.

The closing date for anyone who wants to make an application to it is Friday, November 29.

The second visit to Australia has been scheduled as there will not be enough time to see all the witnesses this month.

A team of four – two from an acknowledgement forum and two from the legal team – will be on the first visit to Australia.

Documents have revealed that between 1947 and 1956, 110 children were sent from institutions in Northern Ireland to institutions mainly in Western Australia.

It was part of a British government policy of child migration.

The HIAI was set up following the damning Ryan Report in the Republic of Ireland that uncovered decades of endemic abuse in some religious institutions.

The homes under investigation include: