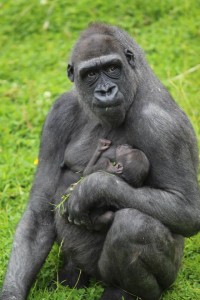 BELFAST Zoo has its first baby ‘King Kong’ in 16 years.

The three-week old still hasn’t got a name.

However, Geoffrey is already proving a popular choice with online Facebook pollsters.

Gugas was born in the wild but had an unfortunate start to life as his parents were killed, probably for bushmeat. As a young, orphaned gorilla, he was acquired by a Portuguese circus and became very ill.

He was abandoned at the gates of Lisbon Zoo and was then moved to Stuttgart Zoo to live in a nursery group for orphaned gorillas.

He finally arrived at Belfast Zoo in 1998 where he joined a social group, including Delilah and Kamili, before being joined by Kwanza in 2011, when she arrived from La Valle De Singes in France.

Zoo curator, Julie Mansell, is delighted with the latest arrival, “Gugas was born in the wild and he is therefore genetically very important to the European breeding programme as he is not represented in the zoo population.

“Because Gugas is so important, last year we decided to test his fertility. The results were less than promising and it was suspected that Gugas would never father any infants.

“You can therefore imagine the entire teams’ delight when we discovered that Kwanza was pregnant with her little miracle!”

Gorillas are often depicted as ‘king kong’ style monsters. However, this couldn’t be further from the truth. Gorillas are peaceful, family-oriented animals that live in family groups, called troops.

During the early weeks, the newborn will cling on to Kwanza’s stomach. As the infant grows and develops, his strength and co-ordination will improve and he will begin to ride on Kwanza’s back.

Zoo manager, Mark Challis, “Almost all apes are either endangered or critically endangered and some professionals have even predicted that all species of ape will be extinct within 30 years, showing the fragility of animal life in the modern world and the importance of zoos such as Belfast!

“In 2011, with the help of our visitors, we fundraised over £20,000 for the European Association of Zoos and Aquaria (EAZA) ape campaign.

“In 2012, we welcomed little Lucy, the first chimpanzee to be born at the zoo in 15 years, she was swiftly followed by Pixie in 2013 and now we have a gorilla baby!”

“In recent decades, gorilla populations have declined by more than 50 percent and this is predominantly due to threats caused by humans, including bushmeat trade, habitat destruction and viruses.

“We are delighted that as a zoo, we can play an active role in the conservation of these apes, especially as Gugas’ genetics are so important. We hope that this is the first of many more to come!”

The Zoo needs the public’s help to pick a name for our latest arrival. The options are as follows:

To vote for your favourite name visit www.facebook.com/belfastzoo
Click `like` to become a fan of our page!

Alternatively, you can email events@belfastzoo.co.uk, state your name, address, postcode, telephone number, email address and the name you would like to vote for.