TRAFFIC DISRUPTION DUE OVER TENNENT’S VITAL AND INTERNATIONAL FOOTBALL MATCH 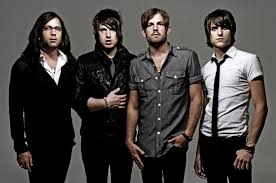 MAJOR traffic disruption is expected on Wednesday evening over the Tennent’s Vital concert and the Northern Ireland international soccer match.

The PSNI say the Boucher Road and Stockman’s Lane will be closed to traffic each night from Wednesday to Friday between 10.15 pm and 11.45 pm to ensure the safe exit of people from the Tennent’s Vital venue.

Less than half a mile away thousands of soccer fans will be filing into Windsor Park for the rescheduled World Cup qualifier between Northern Ireland and Russia.

Police are deploying extra police for traffic duty and also attendants will be out in force to thwart illegal parking.

The concert gates open at 4.30 pm on Wednesday and Thursday and 4 pm on Friday.

Up to 90,000 music fans are expected in south Belfast over the next three days for the Tennent’s Vital festival.

The three-day event will take place at Boucher playing fields from 14 to 16 August.

US rock band Kings Of Leon are the headline act for the first night of the outdoor gigs.

Other acts performing at the event include The Vaccines and The Undertones on Wednesday, while Jason Mraz, Kodaline and Foy Vance take to the stage on Thursday.

On Friday, Tinie Tempah, Rudimental and Naughty Boy complete the line up, before dance star Avicii closes the festival.

Northern Irish band Snow Patrol have made the south Belfast concert their only European festival date this summer.

The band played their first Tennent’s Vital in 2002, and lead singer Gary Lightbody said they were “delighted” to be back.

“It’s great to be playing once more in our home city of Belfast. The Belfast crowd is the best in the world,” he said.

Organisers have issued a guide containing essential information for fans attending the festival.

Translink are running extra buses and trains to take fans to and from the concert and have warned that heavy traffic is expected around the venue.

The first night of the festival coincides with the Northern Ireland football team’s World Cup qualifier against Russia in south Belfast.

“Football fans are advised to disembark at Adelaide train station while passengers heading to Tennent’s Vital should use Balmoral train station.”

Balmoral Train Station is approximately 1km from Boucher Playing Fields and late night special rail services will operate in both directions to Lisburn/Portadown and Belfast, with onward connections to Bangor, Carrickfergus, Antrim and Coleraine.