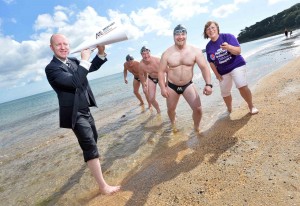 A LOCAL security company is employing state-of-the-art technology to help ensure the safety of a team of Northern Ireland swimmers as they attempt to cross the English Channel later this month for a very worthy cause.

Northern Ireland’s biggest security company Mercury Security will be making sure that the relay team of Gerry Meehan, Paul McCambridge, Ciaran Pollock and Maureen McCoy, are ‘safe and secure’ (Mercury’s company slogan)as they prepare to swim the 38 kilometres across the busy Channel during the week of August 27, in aid of Northern Ireland Children’s Hospice.

Mercury will be tracking the team’s progress throughout using its revolutionary Mercury Eye camera which will wirelessly transmit a live feed to Mercury’s monitoring centre without the need for electricity or broadband.

The attempt to swim the Channel has been spearheaded by Belfast man Gerry Meehan after making a promise to his father before he passed away. Gerry had initially planned to swim the Channel solo but injured himself during training. Just when it looked like his dream had ended, the rest of the team stepped in to make sure Gerry could fulfil his promise.

As members of the Lisburn Masters Club, all of the team are very experienced swimmers who have trained extensively in open waters.

Gerry himself has been training for the Channel attempt for three years while Hillsborough woman Maureen actually successfully swam the Channel four years ago, more recently taking part in a 12k swim in the cold icy waters of Alaska in North America. Ciaran is a swim coach from Lisburn and has swum competitively while Newry man Paul has swum as part of a relay team across the North Channel.

All of the team are under no illusion of the dangers and difficulties that lie ahead in swimming the Channel.

The gruelling challenge will see them swim from Dover in the south coast of England across to France over an estimated period of 15 hours. Throughout the swim, the team will not be allowed to touch the boat and will have to avoid dangers including jellyfish, sewage from boats and the biggest risk – hypothermia.

Indeed, such is the difficulty of the challenge ahead that more people are estimated to have climbed Mount Everest since 1875 than have attempted to swim the English Channel.

Speaking about his upcoming swim Gerry explained: “The idea to swim the Channel came about in 2007 when I spoke to the organiser of a charity event for my 5 year-old niece who was suffering from cancer. That idea stayed with me and when my dad was ill, I promised that I would attempt to swim the Channel for Northern Ireland Children’s Hospice, a charity that was close to his heart.

“NI Children’s Hospice does amazing work in our community and through my swim I hope to raise £5,000 which my father would be delighted with. I am so grateful for the support I have received so far from Mercury Security who have been fantastic and have helped me turned this idea into a reality.”

Mercury Security Commercial Director Francis Cullen said: “We are delighted to be supporting Gerry and the team in this massive physical challenge crossing the English Channel and we wish them well. As local swimmers we wanted to support them in doing this for a great cause and to ensure they cross the Channel safely we will be donating the Mercury Eye which will be set up onboard the support boat and enable us to carefully track their progress.”

Ruth Graham, Physiotherapist at Northern Ireland Children’s Hospice said, “We are delighted that Gerry and the team are attempting to swim the Channel for Northern Ireland Children’s Hospice. Every mile they swim will make a difference to the children and young people who are cared for by Children’s Hospice. £30 raised could pay for one hour of specialist nursing care for a life-limited child and £1,380 could pay for a syringe driver to help manage pain. Gerry and the team should be spurred on during their tremendous challenge by knowing the difference that the money will make.”

“We would also like to thank Mercury Security for their generous support of this difficult challenge,” she added.

Anyone wanting to sponsor Gerry and his team and help support the work that is done within NI Children’s Hospice can make a donation at www.justgiving.com/gerrys-dip.