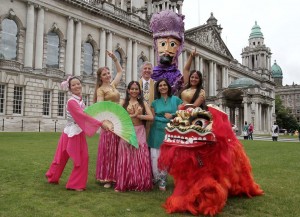 Its the biggest festival of ethnic arts, culture and heritage in the whole of Ireland.

The event is preparing to cast its magic spell over the city later this month.

And it will transform the usually tranquil Botanic Gardens in the heart of Belfast into a bustling, global showcase bursting with exotic sights, smells and sounds from around the world.

Now in its seventh year, the Belfast Mela is building on its success, extending the event to a two day festival over the weekend of 24-25 August.