CAMERAS AT THE READY FOR THE LAUNCH OF MYNI PHOTO COMPETITION 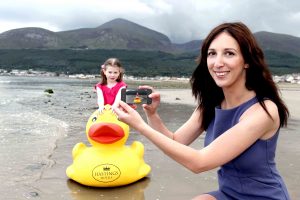 PHOTO TIME… Charlotte Jess from the Northern Ireland Tourist Board (NITB) and Anna Phenix, aged 7, complete one of the tasks during the launch of NITBs MyNI photo competition.

Following the success of the Northern Ireland Tourist Board’s (NITB) MyNI photo competition, the interactive game is back and will once again offer users the chance to capture the best of Northern Ireland on camera.

This time round, NITB has teamed up with Hastings Hotels to offer a range of fantastic short break prizes in Northern Ireland to users who complete a series of ten photo tasks and unique challenges across Northern Ireland.

The game was developed in partnership with the University of Ulster, as part of ongoing research by Alan Hook at the Centre for Media Research, and the tasks are themed around the famous Hastings Hotels’ ducks.

Tasks include capturing a picture that shows your love for the Mourne Mountains, your favourite view of Belfast or posing as a movie star in the Holywood hills. Players will then upload to www.myni2013.com, tagging the location and photo details to earn points.

Other players can vote and share photo entries, scoring points for players, and all players will be ranked on a leaderboard with the highest scorers by August 29 being in with the best chance of winning some of the ten prizes and of course the overall prize top prize – a luxury overnight stay in the Slieve Donard Resort and Spa, a spa treatment, gift voucher, dinner and an outdoor adventure activity for two.

Social and Digital Marketing Officer Charlotte Jess is encouraging people to get out and about in Northern Ireland and to take part in the photo competition.

“We launched our first MyNI photo competition in March and it was so popular that we decided to bring it back, this time with a range of different challenges for players to complete,” said Charlotte.

“The aim of the game is for people to have fun while exploring Northern Ireland and discovering some of the hidden gems on their own doorstep.

“Anyone can take part in the competition, all you need is a smartphone or camera to take the photos and a little bit of creativity to capture the beauty of Northern Ireland,” she added.

“The online game is interactive allowing users to upload their photos, browse other photo entries and to vote for their favourites to be in with the chance of winning one of ten fantastic prize packages.

“We have linked up with Hastings Hotels to provide the prizes which include 4* overnight stays, luxurious spa experiences and dinner,” she said.

“I hope everyone will take part in the competition and enjoy sharing their photos of exploring Northern Ireland,” she added.

For more information and to take part in MyNI sign-up now at www.myni2013.com