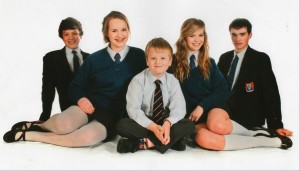 THE family of a schoolboy who died in a tragic farm accident have endured a “devastating week,” his funeral has been told.

And the minister at Aaron Macaulay’s church service revealed that he had previously survived a serious accident when he was two-years-old.

Aaron was working on farm machinery on steep ground in the Rathfriland Road area at Ballyward, when the fatal accident happened.

His funeral has been held at Drumgooland Presbyterian Church.

Rev Michael Davidson told moruners:  “It has been a devastating and heart-breaking week for all of us, particularly for Aaron’s family”.

He said that following his first accident, Aaron showed his “strength and bravery every day”.

The minister said that as a result of the previous accident, Aaron had a damaged arm that needed surgery and skin grafts at regular intervals.

“He never complained about his arm, although he was probably more troubled by it than anybody knew and he would often get tired in the afternoon at school,” he said.

“On each occasion he was faced with further surgery, he dealt with it with great calmness and bravery.”

He added: “The fact that Aaron was so full of life and so full of fun was all the more special because of what he had come through.”

Before the funeral, a private service was held family on the Rathfriland Road in Castlewellan.