THE DUP and Sinn Fein have locked horns after the Parades Commission placed restrictions on a controversial IRA commemoration event.

In its ruling the Commission said the ‘Tyrone Volunteers Commemoration event’ will be allowed to go ahead on Sunday 11 August – but it will not be allowed to proceed around The Diamond.

The DUP said the decision “defied logic” while Sinn Fein said organisers would seek a review of the decision.

In its determination on Thursday the watchdog said: “The parade shall assemble at the notified assembly point, but shall not process to High Street, John Street, the Diamond, Main Street or Ferguson Crescent as notified.

“It shall instead turn right and process directly onto Castlefin Road, resuming the remainder of its notified route.”

Only notified bands are allowed to take part in the parade which must not feature any paramilitary trappings, the commission has ruled.

A protest from the Derg Valley Victims’ Voice has also been given the go ahead.

The parade organisers announced on Tuesday that it would be rerouted away from the cenotaph and resubmitted their application accordingly.

Unionist politicians have vehemently opposed the parade. It falls this year on the 40th anniversary of the deaths of two IRA men from Castlederg, Seamus Harvey and Gerard McGlynn, who died in 1973 when the car bomb they were transporting detonated early.

The Parades Commission said it has received 500 emails, letters and telephone calls from many who are “deeply offended by this parade and who oppose it in the strongest terms”, as well as some from those who support the parade.

A spokesperson for the commission said: “Although the original route was revised, on the basis of the representations received the Commission has concluded that if the parade were to proceed as notified it would have a damaging effect on community relations in the town.

“Consequently, the Commission has issued a determination to restrict the parade’s route away from the ‘Diamond’ area, including the Cenotaph, in Castlederg.

DUP MLA Thomas Buchanan said: 2This ruling defies logic. The Parades Commission has failed to recognised the pain and hurt this will cause to victims’ families.” 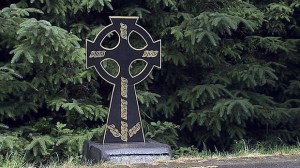 Sinn Fein were also scathing of the decision.

Ruairi McHugh said: “This determination makes a mockery of the concept of shared space within Castlederg centre and the fact that locally there has been dialogue for over five years surrounding parades in the town.”

The DUP and Sinn Féin had met with the Parades Commission to discuss the event. The watchdog has also received representations from parade organisers, victims and residents.

First Minister Peter Robinson and deputy First Minister Martin McGuinness have disagreed over whether it should be allowed to do ahead.

DUP leader Mr Robinson said: “If you’re going to have a commemoration at all, and I think it’s inappropriate to have it at all, you would have it at the place where they blew themselves up rather than at the target town. That is totally insensitive.”

Sinn Féin’s Mr McGuinness said: “The parade which is about to take place is a parade that is totally and absolutely confined to the nationalist and republican areas of the town, and it doesn’t impinge on the unionist communities.”