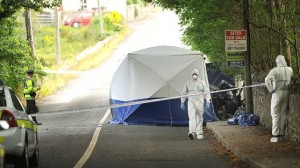 GARDAI in the Republic are waiting on the results of post-mortem examinations later on Tuesday on the bodies of two brothers discovered in the boot of a crashed car.

Eoghan Chada, ten, and five-year-old Ruairi had not been seen since leaving their home in Co Carlow with their father, Sanjeev, on Sunday.

Gardaí do not believe the children died from injuries sustained in the crash in Westport, Co Meath.

Sanjeev Chada, 43, was driving the car as the time when it crashed head long into a stone wall.

His remains in Mayo General Hospital but his injuries are not thought to be life-threatening.

Eoghan, (10) and his five year-old brother Ruairi Chada found dead in the boot of their dad’s crash Ford Focus

Mr Chada and his sons had left their home to go to the Dome Bowling Centre in Carlow town.

Garda Superintendent David Taylor has appealed to the public for any information they may have about the car in which the bodies were found.

Anyone with information is asked to contact Westport Garda Station on 098-50230.