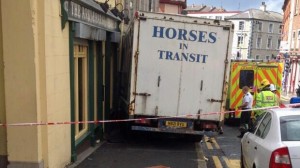 A POLICE investigation is underway after a mother carrying her infant baby was struck and trapped by a runaway horsebox.

The incident happened in Irish Street, in the centre of the busy town of Downpatrick, Co Down on Tuesday afternoon.

Miraculously the days old baby was rescued from the scene unharmed.

Police are now trying to establish how the transporter rolled down a hill without anyone behind the wheel.

The scene of the accident is likely to have been caught on the local police station’s security cameras.

The horsebox vehicle crashed in Irish Street around 2.30 pm.

Eyewitnesses report hearing a loud bang as the lorry smashed into the front of a bar and a dental practise in the town.

Emergency services attended the scene and worked to rescue the mother and baby from beneath the vehicle.

Both were taken to hospital in Belfast.

The mother has been taken to the Royal Victoria Hospital and her baby to the nearby Royal Belfast Hospital for Sick Children.

Their conditions are both said to be stable.

One local businessman said people were shocked at what happened.

“We heard this large bang and next thing there was people out in the street in a very distressed state,” he said.

“I could see the horsebox right up against the window of the shop and the pub.

“The next thing a woman told me that it had struck a woman who was carrying her baby.

“Fortunately they got the baby out very soon after the crash.

“But she said it was at least 30 minutes before they got the baby’s mummy out. She and her baby were taken away in an ambulance.”

Within minutes of the crash, a local fire crew and paramedic team from the Down Hosptial were on the scene administering first aid.

Police believe that the horsebox had broken down earlier that day not far from the local PSNI station.

A number of men were seen working out on it throughout the day.

However, just around 2.30 pm, the horsebox’s handbrake cable appears to have snapped and the vehicle hurtled down Irish Street careering into the dental practice and bar.