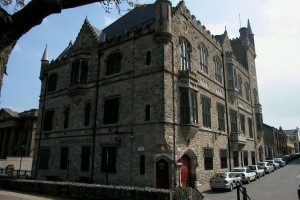 SENIOR Sinn Féin members and nationalist representatives have met with the Apprentice Boys in Derry.

The meeting was to show solidarity with the ABOD after the third paint bomb attack on their memorial hall in as many days.

The latest damage to the building at Society Street in Derry was discovered by police in the early hours of Friday. Extra patrols had been put in place after the previous attacks.

“We are all absolutely disgusted at this attack,” Sinn Féin Foyle MLA Raymond McCartney said

“We’ve all seen in recent weeks and recent months the great steps taken in this city and the memorial hall and the Apprentice Boys have all been part of that story.

“It was important that we came here to show our solidarity and add our words of condemnation on this attack.”

According to Phillip Gillen, a tour guide for the hall, the latest attack was also the worst.

“We’ve just got the doors done – they’ve been damaged at a lot of cost. It’s up high and down low on the building and it just looks an absolute mess. It’s very disheartening.

“We just got the hall all cleaned up and spotless and now it’s looking worse than ever.”

The attack comes just a few weeks ahead of the Apprentice Boys’ annual Relief of Derry parade, which is no longer considered contentious due to the work carried out in the community to facilitate the event.

But the Apprentice Boys believe that the attacks on the hall are sectarian hate crimes.

“It’s nothing new to us – this is the most attacked hall in the world,” Governor Jim Brownlee said.

“And the fact is they are getting away with it. Over the past few years, there has only been one conviction.”

The attack has also been condemned by Foyle SDLP MP Mark Durkan.

“Attacks like these are attacks on the entire community,” he said.

“It is not enough just to register our disgust and condemnation.

“We want to see people stand up and give whatever information may be of use to the police without delay – so that the small minority who are all too often responsible for carrying out this type of attack are apprehended and brought to justice.”

Sinn Fein councillor Colly Kelly called for an end to all attacks in the Bishop Street area.

“In the past week, we have seen attacks on First Derry Presbyterian church and the now the Apprentice Boys’ hall,” he said.

“Paint bombs have also been thrown from the Fountain Estate out onto Bishop Street hitting the fronts of a number of homes in Long Tower Court and others landing in the roadway.

“We cannot allow these sorts of senseless actions to occur in this day and age nor be used to heighten tensions in and around the greater Bishop Street/Fountain area.”

The PSNI said their enquiries are ongoing and asked anyone with information to pass it on by contacting Strand Road Police Station on 0845 600 8000.