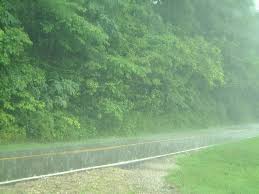 MOTORISTS and the public are being put on alert over the risk of flash flooding in parts of Northern Ireland on Thursday.

The warning comes after three weeks of strong sunshine and a heatwave.

A yellow warning for rain has been issued by the Met Office with the possibility of between 20 and 40mm falling in a short space of time.

The flash flood and heavy rain risk will run until midnight.

Forecasters say it will be an unsettled day with frequent heavy and often thundery showers.

“The public should be aware of the risk of localised disruption to travel due to surface water flooding,” a spokesperson explained.

“The start time of this warning has been brought forward to cater for the risk of localised disruption associated with the heavy overnight rain moving north across parts of Northern Ireland, northwest England and southwest Scotland.”

Met Office weatherman John Wylie said: “It looks as though we’re in for a day of heavy showers and thunderstorms.”

Heavy rain caused flooding overnight in parts of Dublin, where the city’s fire brigade were operating as many as 20 engines at one stage.

A portion of the roof in the Mater Hospital and in Clery’s Department Store fell in.

Several homes were affected by floodwater and some DART rail services have been suspended due to lightning damage to overhead lines.

The warning comes after nearly three weeks of summery weather in NI.

“There will be a cloudy start with heavy thundery showers, still with some local torrential downpours, soon clearing north,” added John Wylie.

“Then brightening with some sunshine though further thundery and torrential showers developing, and maintaining the risk of flooding especially in central and western areas.”