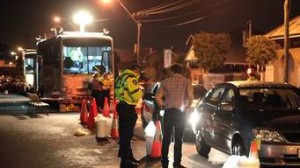 PLANS are in the pipeline to clamp down on so-called ‘booze cruise’ buses.

Under the proposals, anyone caught drinking alcohol on a bus could face a fine of up to £1,000.

Mr Durkan said sanctions for operators could include restrictions on their licenses, or ultimately losing it if merited.

“I have absolutely no problem with people enjoying themselves,” said the new Environment Minister.

“‘Booze buses’ though can be dangerous on our roads.

“This consultation demonstrates my commitment to penalise those who encourage and facilitate drunkenness on buses.

“Unfortunately the practice of drinking on board buses is still common place in Northern Ireland and problems have been further escalated in recent years due to the increased popularity of ‘party’ vehicles or ‘booze buses’ for social use.

“This activity is illegal and unsafe and action must be taken to address it.”

In other parts of the world, it is illegal to consume alcohol on buses and coaches.