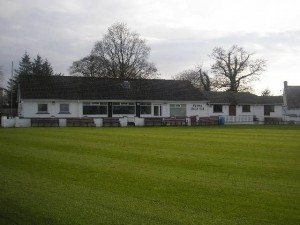 Eglinton cricket club officials are devastated after its ptich was vandalised

A CRICKET club has been hit for six after vandals have severely damaged its pitch just days before it hosts a major cup final.

An oil-based substance was poured onto the pitch at Eglinton Cricket Club in Co Derry and has made it nearly unplayable.

The attack has happened just days before the North West Senior Cup Final between is played here between Donemana and Brigade.

It has devastated club officials after weeks of preparation.

Said club secretary John Pierce: “I came down this morning at 9 o’clock as normal to find the covers had been interfered with.

“The pitch, which we are in an advance stage of preparing for Friday and Saturday had been damaged by way of a liquid poured on it.

“I was very very emotional to see it and to think we had been preparing this for weeks and potentially it had been put in jeopardy.”

“From a club point of view we are a mixed club religion wise, race wise and we are just at a loss to understand why anyone would do this to a sports club of any sort.”

Joe Doherty from Cricket Ireland said the attack was a “big setback”.

“All the positive work that they’ve been doing, almost 100% by volunteering, has been knocked back because they feel someone is against them, begrudging them for what they are doing,” he commented.

Club members and members of the community are now attempting to repair the damage in time for Friday’s final.

At the moment Eglinton say the Cup Final will go ahead.

Police are studying CCTV footage as part of an investigation into the incident.