REVEALED: IRISH TYCOON IN JAIL OVER HIS KIDNAP BY THE IRA 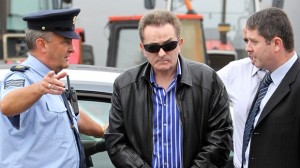 AN Irish property tycoon, who was  held captive for eight months by members of the Provisional IRA, has faced a court accused of lying about being kidnapped and held hostage.

Kevin McGeever was hauled before Strokestown District Court, Co Roscommon, in the west of Ireland after he was arrested in Dublin on Tuesday.

The 68-year-old, whose address was given as Nirvana, Co Galway, will appear before Harristown Court in Castlerea, Co Roscommon, on Friday.

He has been remanded in custody after being charged with wasting police time.

McGeever, orginally from Swinford in Co Mayo, disappeared last May.

He was found wandering barefoot on a road in Ballinamore, Co Leitrim in the west of Ireland in January.

Belfast Daily can reveal that McKeever was held by members of the IRA who are originally from west Belfast.

Gardai believe the gang had given McKeever money to launder through property deals abroad.

But sources said the gang believed McKeever had “stroked” them and were demanding their money back.

He was only released as the IRA feared a Garda investigation team was closing in on his hostage home in Co Leitrim.

Gardai have established that one of his captors is a leading figure in the Provisional IRA who took part in a Sinn Fein organised republican commemoration in the Republic dresseed in white shirt, black tie and black beret.

The developer, who had lived in a mansion in Co Galway before he disappeared, was described as dishevelled, with a long beard, hair and fingernails.

Passersby found him malnourished, dehydrated and several stone lighter with the letters “tief” scrawled into his forehead. They took him to a local Garda station.

The defendant’s brother Brendan described his sibling as looking like “a weather beaten 90-year-old man who was just released from a concentration camp”.

McGeever is charged under Section 12 of the 1976 Criminal Law Act, relating to knowingly giving false information that an offence had been committed and wasting Garda time.

The charges allege McGeever made false reports and statements to Gardaí, between 29 January and 28 February this year, that false imprisonment, assault, and threats to harm had occurred.

McGeever sat in a packed courtroom surrounded by dozens of other defendants on minor charges before his case was called.

Dressed in a black leather jacket and blue and white striped shirt, the property developer did not speak during the brief hearing.

“He is not in a position to come up with that kind of money,” Ms Devine said.

Judge Geoffrey Browne rejected the application and remanded McGeever in custody with consent to bail.