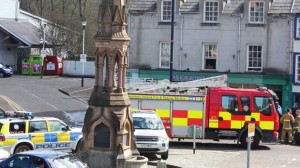 DETECTIVES are investigating after a derelict building in a seaside town was damaged in an arson attack.

The local Fire and Rescue Service received a 999 report of the blaze shortly before midnight on Monday.

Two fire engines and crews attended the scene to find the front porch was well alight.

A Fire and Rescue spokesperson said it was thought to have been started deliberately.

Crew members brought the fire under control by 1.34am on Tuesday morning.