REVEALED: THE MOMENT WILLIE FRAZER WAS ARRESTED OVER STORMONT PROTEST 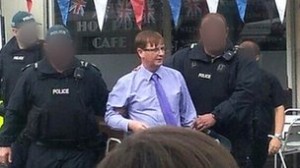 THIS is the moment Union Flag protest leader Willie Frazer was arrested on suspicion of breaching his bail conditions.

Mr Frazer was detained at a cafe after attending the Stormont parades debate on Tuesday.

Up to to six landrovers from the PSNI’s Tactical Support Group pulled up on the Newtownards Road to arrest him.

His arrest has sparked angry calls on social networking sites for protests on Tuesday night.

Earlier, protestors had gathered at the steps of Stormont ahead of the emergency recall.

Mr Frazer’s bail conditions banned him from being within two miles of any public demonstration or protest.

A police spokesman has confirmed a man in his 50s has been arrested in the east Belfast area.

Last month the 53-year-old was allowed by a judge to attend a parade marking the Battle of the Somme.

He was also given leave to be at a Twelfth of July demonstration and the Scarva sham fight. 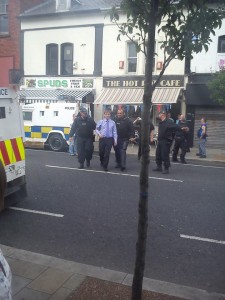 He appeared before Belfast Magistrates’ Court on Friday, June 28 seeking to have that prohibition temporarily lifted for three forthcoming events.


2 Responses to REVEALED: THE MOMENT WILLIE FRAZER WAS ARRESTED OVER STORMONT PROTEST