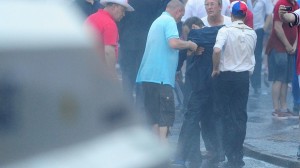 POLITICIANS have clashed after a night of violence in Belfast followed the annual Twelfth of July celebrations.

Thirty-two police officers were hurt during the disturbances on Friday night. One female officer from the UK sustained a broken leg.

DUP North Belfast MP Nigel Dodd was knocked unconscious after being struck with a missile lobbed by a loyalist rioter in the Woodvale district of north Belfast.

As Northern Ireland counted the cost of potential tourism losses to images beamed around the world, Stormont politicians became involved in a verbal blame game.

However, he out at the Parades Commission, who ruled that the Orange Order could not march home past Ardoyne shop fronts on Friday evening.

The First Minister said: “While there is justifiable anger and frustration at the Parades Commission – who bear much responsibility for the situation in Belfast, as do those who attacked parades as they passed certain locations – nonetheless, those who are using the cover of protest to attack the police are massively damaging the cause they support.”

Sinn Fein’s Gerry Kelly argued that the vast majority of parades across Northern Ireland passed off peacefully “because they’re in areas where they’re accepted”.

He added: “They can’t blame the Parades Commission.

“It is the only show in town and they are there because the Orange Order will not come to agreement and have refused to talk to residents.”

Mr Robinson also claimed violence broke out on the Newtownards Road after an Orange Order parade was “attacked from Short Strand”.

“Some young people from within the Short Strand did then engage in stone throwing back and forward over the interface for a short period.

“There was no orchestrated attack on the Orange Parade as the DUP have tried to spin.

East Belfast Alliance Party MP Naomi Long said: “We need responsible language and leadership from elected representatives, rather than blame game politics to ensure this violence is brought to an end.

“I am calling for calm across East Belfast. The rule of law must be upheld and I would urge everyone to give the PSNI their full support as they bring this serious situation under control.”

“It’s quite clear who was responsible for last night – in my opinion the leadership of the Orange Order failed the Orange Order and these communities and they led people to the top of the hill and as a result saw people they represent rioting,” he said.

“The decision announced hours ago that they are suspending their protests was a massive admission by themselves that they were culpable for what happened.”

Nelson McCausland, DUP, said: “Whether the Orange Order called for protests or not this was going to happen, it is the outworking of that determination.

“The violence is wrong and my own party colleague [Nigel Dodds] suffered as a result, but if you send out the message ‘we reward violence’, as the Parades Commission do, it is inevitable it is going to happen.”

Asked who he thinks is responsible, loyalist community leader Jim Wilson said: “The police have a bit of carrying to do.

“I tried to remonstrate with the police officers – Scotsmen and Englishmen. How can I speak to these people who don’t know who we are and what this is about?”

The Assembly has been recalled to discuss the Parades Commission’s ruling on the march through Ardoyne in north Belfast.

Alban Maginness of the SDLP said it is time to begin dialogue.

“Richard Haass is due in Northern Ireland next week to lead fresh talks to resolve some of our most divisive issues,” the north Belfast MLA said.

“We have a real opportunity here and I would urge all sides to participate fully in a bid to avoid any repeat of last night’s violence.”

A statement from the UUP said: “The Ulster Unionist Party calls on everyone to step back from last night’s violence in Belfast and to clear the streets of all protests.

“We welcome the Orange Order statement that has called for an end to street protest. We ask all who belong to, or support, that institution to heed that request.”


2 Responses to POLITICAL WAR OF WORDS OVER BELFAST RIOTING