Orangemen in East Belfast have halted their return march on Middlepath street.

It is understood they awaiting news of what happens at Ardoyne where the return journey is banned from going past Ardoyne shops.

A massive security operation is already underway in the Ardoyne. 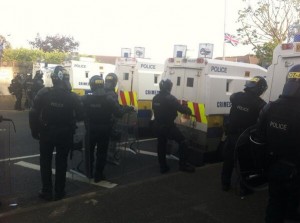 There are also two water cannons in the area in case trouble erupts.

PSNI riot squad units have moved in to enforce the Parades Commission.