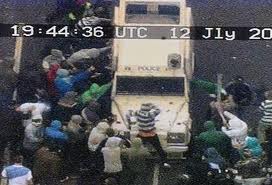 THE Assembly will be recalled on Tuesday to debate parading and counter protests by residents’ groups.

It follows the Parades Commission decision to block the return of an Orange Order parade past the Ardoyne shops on the evening of the Twelfth of July.

The DUP lodged the Assembly recall request on Wednesday.

Party leader Peter Robinson said it would “allow for the expression of opposition to a decision (by the Parades Commission) which many see as rewarding riotous behaviour by dissident republicans last July”.

“This debate will provide the opportunity to examine why it is that some feel the need to oppose the sharing of roads and to support tactics which ultimately disregard respect for the cultural of those from the Unionist community,” he said.

The First Minister said Parades Commission decisions “do nothing to encourage mutual respect and tolerance for culture and identity”.

“Rather recent outcomes have served to divide and polarise the wider community,” he added.

“The initiative taken by the local lodges in their recent engagement with residents was the right thing to do and was warmly welcomed throughout the community. Regrettably that progress has not been recognised. ”

The DUP leader appealed to all concerned to “use every possible influence over the next few days to ensure a peaceful and dignified Twelfth”.

“Continued refusal to tolerate the passing of a short parade fuels the view that nationalists and republicans have little interest in building a genuinely respectful and tolerant society,” he added.

The Orange Order has described the restriction preventing the return parade as “ludicrous”.

In a statement on Wednesday, the Order said the ruling had “effectively signed the death warrant of this discredit and unaccountable quango”.

The Order said the County Grand Orange Lodge of Belfast had made “genuine and sincere efforts to diffuse tensions on parades in the area.

“Ligoniel brethren took the bold and proactive decision to engage with nationalist residents following on from the publication of the comprehensive template, designed to address the issue of respect concerning St Patrick’s Church.

“Despite such unprecedented initiatives, the Parades Commission has opted to reward violence and notably the threat posed by dissident republicans.”

It added that the County Orange Lodge of Ireland advised supporters not to be drawn into violence and said it “looks forward to a peaceful day” on Friday. 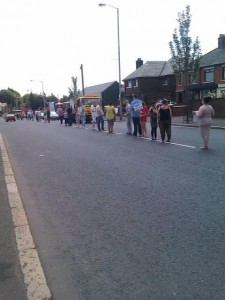 “This antiquated and unelected body is clearly not content in merely stifling our proud Protestant culture and heritage; but increasingly by its actions is causing irreparable damage to community relations and a so-called shared future in north Belfast,” said the Orange Order statement.

Earlier, the Greater Ardoyne Residents Collective (GARC) called off a protest march in area on the afternoon of the Twelfth at 3pm following the watchdog’s ruling.

The group still plan to stage a morning protest.

Friday’s morning Orange parade will go ahead in the area with no music or drumbeats and only 100 supporters are allowed to accompany the Lodges and bands.

The Parades Commission issued its unprecedented determination in the absence of agreement between the Orange Order and local nationalist residents.

The annual feeder parade in the area has been marred by serious violence in recent years and it was hoped talks could pave the way for a more peaceful Twelfth this year.

The face-to-face talks, which took place at the weekend, were initiated at the request of loyalist residents’ group, the Twaddell and Woodvale Residents Association, who called on three local lodges in north Belfast to engage in direct dialogue with the Crumlin Ardoyne Residents Association (CARA).

On Tuesday evening, the Parades Commission said it was “disappointed” that the Orange Order did not engage directly with CARA until six days before the parade.