TALKS between nationalist residents in Ardoyne and the Orange Order broke down on Sunday night without agreement.

As a result, the Parades Commission is now expected to give its determination later on Monday on an Orange Order parade through the Ardoyne area on the Twelfth of July.

A parade is due to pass through the area on Friday morningbefore joining up with the main Belfast District at Carlisle Circus.

Orangemen have asked to parade back through the Ardoyne shop fronts on the Twelfth evening.

As Belfast Daily revealed last week, if the Parades Commission ban the evening parade, local Orangemen and several bands plan to defy the ruling and march.

It will cause a major headache for the PSNI because in recent years there has been trouble, with police coming under attack from gunfire, pipe bombs and petrol bombs.

On Monday morning, a statement from the Crumlin Ardoyne Residents Association (CARA) said it was “unfortunate” the dialogue had come “so late in the day”.

Spokesman Joe Marley added: “We were unable to find a resolution with regards to the 12th of July parades this Friday and it was unfortunate that the talks came so late in the day.

“We are calling on all relevant stakeholders to use their influence in a common effort to defuse tensions. While we were unable to secure a resolution with regards to this Friday, we remain committed and hopeful to re-engage with local lodges after the 12th of July.” 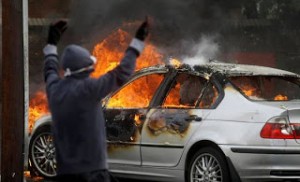 The annual Ardoyne parade has been marred by serious violence in recent years and it was hoped the move could pave the way for a more peaceful 12th July.