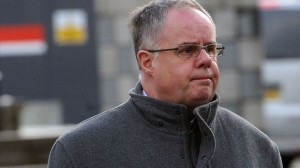 A FORMER priest branded a “danger” to society told a young boy he could get his dead grandfather into heaven as he sexually abused him.

On Friday, serial child abuser James Martin Donaghy was jailed for a total of two years at Belfast Crown Court for the offences.

But the 55-year-old will not spend on extra day in jail because he is already serving a ten-year term for the sex abuse of three other victims.

Belfast Crown Court Judge Kinney told Donaghy that had these current offences been dealt with when originally sentenced, they would have been taken into consideration.

In the circumstances, given the “principle of totality,” his sentence will run concurrently with the previous term.

Judge Kinney said that no-one was at fault for the case not being dealt with sooner, in particular, there could be no criticism of Donaghy’s victim.

He added that sexual abuse had “devastating consequences and not all victims are ready to voice their complaints at an early stage”.

The court had heard that at the time, Donaghy, who was originally from Lady Wallace Drive in Lisburn, was a priest in the west Belfast parish of Corpus Christi in Ballymurphy.

He was supposed to be instructing his victim in his First Confession and First Holy Communion – instead Donaghy took to abusing the boy.

On one occasion, after the youngster confided in him over his distress his dead grandfather might be in purgatory, Donaghy took advantage of him, telling the child they could help one and other.

Donaghy then promised he could get the grandfather “into heaven if he helped him” before exposing himself, forcing the boy to touch him and then, perform a sex act.

However, the abuse first began when the boy and Donaghy were alone in the school library.

Donaghy asked him if he wanted to be good, before exposing himself saying: “This is one way to be good – be nice to the priest” and forced him to touch him inappropriately.

In all, Donaghy pleaded guilty, as his trial was about to begin last month, to four charges of indecently assaulting the boy and one of common assault, between January and May 1989.

Judge Kinney said that while Donaghy’s guilty pleas deserved credit, the former priest, who had taken advantage of his victim, claimed that he could not recall the actual abuse, showing elements of denial on his part.

He added that Donaghy was still considered a dangerous offender and posed a significant risk of serious harm to the public and that his callous and abusive treatment, of his victim, has had a lasting effect on him.

His crimes were all the more pernicious because they had involved a breach of trust of a youngster in a vulnerable position and that there had also been elements of grooming in his offending.

However, Judge Kinney said there were some indications of remorse and a recognition by Donaghy of his responsibility for what he had done.

The judge said that it could only be hoped his guilty pleas would contribute and allow his victim closure to this harrowing part of his life.

The judge also told Donaghy, who was again put on the Sex Offenders Register for life and put on the barring list and banned from working with children and vulnerable adults, that had he contested the charges, he would have been jailed for four years.