THE BIGGEST SHIP IN THE WORLD ARRIVES IN BELFAST 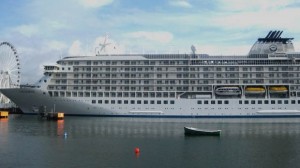 The World, the largest ship on earth, has arrived in Belfast Dock,

THE World has arrived in Belfast!

The largest privately owned residential yacht on earth of the same name docked in Belfast on Wednesday for the first time in over a decade.

The 644-foot luxury ship comes with 165 bespoke private residences was last here in August 2002 during its inaugural visit.

Belfast was chosen as its first port of call while on a ten day visit around the island.

The World, which is taking in more than 30 countries this year, landed at Pollock Dock for a two night berth.

The ship’s residents, which hail from 19 countries worldwide, will take in visits to tourist attractions such as the Giants Causeway and the Ulster American Folk Park while on the northern leg of their voyage.

On Friday, the impressive vessel will head for the City of Culture before making its way to Galway next Monday. The journey ends in Dublin next Wednesday with a three day stopover.

The average occupancy onboard at one time is 150-200 residents and guests.

Some residents live on board all year round, while many others choose to spend part of the year on the ship.

They circumnavigate the globe every two to three years following an extraordinary itinerary selected by themselves.

Highlights of this year’s world tour include a recent expedition to Russia’s White Sea complete with several polar bear sightings, and an incredible voyage through Norway’s breathtaking fjords.

The World offers six restaurants, exceptional golf facilities with onboard putting greens and a state-of-the-art golf simulator, the only full-size tennis court at sea, swimming pools, a spa, a fitness centre, expert destination lecturers, a library and a cinema.