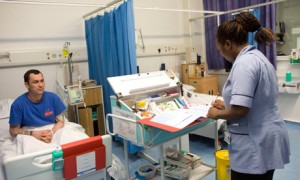 Inspectors were told that the numbers of staff to manage patients at nights and weekends was stretched, a review said.

The hospitals’ own senior experts recommended greater access be granted to specialities such as cardiac investigations.

A report by the Regulation and Quality Improvement Authority (RQIA) found many examples of good practice.

However, it said: “In the Belfast Trust: nurse staffing levels were considered to be stretched to manage the complexity of patients in hospitals.

“At Ulster Hospital, nurse staffing was also considered to be stretched and arranging discharges and transfers could be difficult at nights and weekends,” the report continued.

The information was relayed to them by experienced clinicians.

A total of 29 recommendations were made in the report including

• Trusts should review out-of-hours risks and their arrangements for monitoring safety and quality indicators, including mortality patterns.

• Trusts should have written policies for transfer of patients between wards, and between hospitals at nights and weekends, where these are not already in place.

• Access to cardiac investigations and services should be examined across all hospitals in Northern Ireland to ensure that patients have appropriate access to the same range of services.

Many hospital patients in Northern Ireland did not get enough sleep at night because of noise, it was revealed.

Temperature and brightness on the ward also contributed to the insomnia, inspectors said.

The RQIA reviewed standards of care after concerns were raised about significant patient death rates in Great Britain.

It said at times pressures to accommodate emergency admissions during the night can lead to the transfer of patients between wards, and there may also be difficulties in providing staff to accompany those who need to be transferred between hospitals at night.

The report said: “Surveys of patient experience revealed that, while patients were generally positive about many aspects of their care, a recurrent theme was the difficulty in sleeping in hospitals due to the impact of noise.

While 70% of those who responded to a survey of trust patients felt they did get enough sleep on the ward at night, only 30% from the Patient Client Council felt the same.

RQIA chief executive Glenn Houston said: “During the review, RQIA found that there were differences between acute hospitals in the availability of services and staffing at nights and weekends.”

The report said effective handovers between day and night medical teams were an essential component of safe practice in hospitals, and the review team welcomed the introduction of multidisciplinary Hospital at Night teams, which have enhanced coordination and handover arrangements.

“However, the review team recommends that trusts examine arrangements for handover to staff coming on duty, particularly after night shifts,” it added.

Mr Houston commended innovative practice, including an emergency nursing team to cover potential gaps in services at nights and weekends, and the availability of discharge coordinators at weekends.

He added: “The review team expressed concern about the frequency of fire drills at night or weekends – three trusts did not carry out these tests outside normal hours.

“RQIA recommends that standards should be agreed for the frequency and timing of fire drills and major incident plans.”

Last year, seven wards at Altnagelvin Hospital in Londonderry were evacuated after a fire at the top of the 11-storey building.