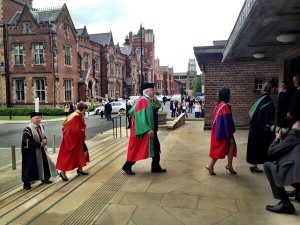 SIR David Attenborough is due to receive an honorary degree at a graduation ceremony at Queen’s University, Belfast on Monday.

The veteran broadcaster will be presented with the accolade for exceptional services to science and broadcasting at a ceremony in the Whitla Hall on Monday.

He is best known for writing and presenting the nine Life series, having served as Controller of BBC Two, and Director of Programming for BBC Television in the 1960s and 1970s.

He is the only person to have won a BAFTA in black and white, colour, HD and 3D.

Speaking about receiving his honorary degree from Queen’s, Sir David Attenborough said: “My work in television has been devoted over the years to documenting the natural world, and to explaining both its importance to humanity and its vulnerability.

“I am greatly honoured that Queen’s University Belfast should have endorsed that message by granting me this distinguished degree.”

Sir David will be joined by local film director and the only Northern Ireland winner of an Oscar, Terry George, who will receive an honorary degree for exceptional services to film and drama.

He is best known for his Co Down film The Shore which won the Academy Award for Best Live Action Short Film in 2012.

On receiving his honour Terry George said: “There’s nothing more gratifying than to be recognised and honoured in your homeland.

“This honour from Queen’s today is a highpoint of my career and an inspiration to continue to strive to create art and entertainment.”

Also receiving an honorary degree is the Director of the Community Foundation for Northern Ireland, Dr Avila Kilmurray, for exceptional services to the community.

Dr Kilmurray has been working in Northern Ireland since 1975 on community education projects, a range of anti-poverty initiatives, and the establishment of the Women’s Aid organisation.