NI REMEMBERS BATTLE OF THE SOMME 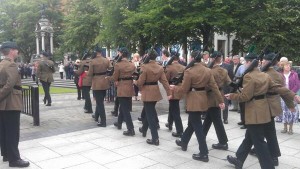 THE 97th anniversary of the Battle of the Somme is being commemorated across Northern Ireland on Monday.

A ceremony is being held at the cenotaph at Belfast’s City Hall to honour those who died in 1916.

Soldiers from the 36th (Ulster) and 16th (Irish) divisions fought in the battle between 1 July and 13 November.

Lord Mayor of Belfast Máirtín Ó Muilleoir laid a wreath at the Cenotaph on Monday morning ahead of the ceremony.

During the service, which start at 11.15 am, wreaths will be laid by Deputy Lord Mayor Christopher Stalford, First Minister Peter Robinson and Irish Minister Joe Costello.

Last year was the first time that an Irish government minister took part in the Belfast commemoration.

Four hundred and twenty thousand British soldiers were killed or injured at the Battle of the Somme.