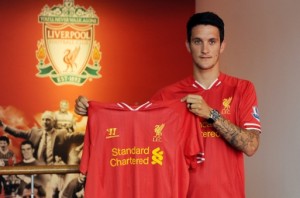 LIVERPOOL have completed the signing of Spanish forward Luis Alberto from Sevilla on Saturday.

The 20-year-old, who can play anywhere across the attacking line, has penned a long-term contract after passing a medical at Melwood.

He spent the 2012-13 campaign on loan at Barcelona B, where he notched an impressive 11 goals – and was devastating with his creativity, providing 17 assists in 38 appearances.

Reds boss Brendan Rodgers said: “We are all delighted that Luis has decided to join Liverpool.

“He has the correct footballing profile and mentality to be a Liverpool player.

“I look forward to working with him to develop his talent and he joins a group of young exciting players at our club.”

The Spaniard has represented his country at three different age levels. He has turned out for the U18s, U19s and made his U21s bow against Belgium in February.