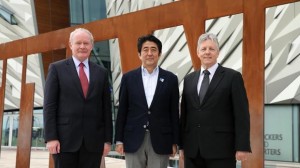 HEALTHCARE firm Terumo has announced the creation of over 400 new jobs at its plant in Antrim.

The Japanese firm, which manufactures medical equipment, is also planning to expand into research and development in NI for the first time as part of a multi-million pound investment.

It comes after Japanese Prime Minister Shinzo Abe hailed the region as a “treasure trove of challenge, openness and innovation” following the G8 summit.

The 416 new jobs – including entry-level posts in manufacturing, scientific, microbiology, chemistry and engineering – will pay over £6m in yearly salaries.

First Minister Peter Robinson said: “I commend the commitment of local people to providing high quality standards at Terumo which impact on the health and wellbeing of people around the world and for this they should be very proud.

“This impressive Larne facility is one of the most advanced of its type in Europe.”

Deputy First Minister Martin McGuinness said: “Today’s announcement will not only bring local employment but will result in the facility expanding its remit into research and development for the first time.”

Terumo BCT has been in Larne for over nine years and currently employs 260 people.

Its headquarters are in Lakewood, Colorado, and it also has plants in Japan, India, Belgium and China, with a worldwide workforce of 4,700.

Invest NI is providing £2m of support towards the new jobs.

Troy Deppey, a senior executive at Terumo, said: “The capability of the Larne facility is renowned throughout the company and our global markets so I am delighted that, with Invest NI’s support, we can grow this facility and really cement our presence here.”

Prime Minister David Cameron has pledged to boost the local economy and will return this autumn to lead an investment conference.

During the G8 week, Mr Abe met compatriot businessmen in NI and said he is determined to support Japanese companies aiming to set up oversees.

She said: “The Executive is committed to stimulating growth and creating jobs in order to build a positive future for Northern Ireland.

“Today’s announcement will help us to achieve that objective. Terumo BCT is a pioneer in the development of blood processing technologies so the new jobs and R&D commitment will reinforce the strength and capability of our life sciences and healthcare sector globally.”