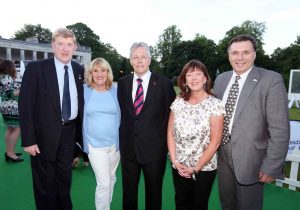 ECHOING the words of UK Prime Minister David Cameron and Japanese Prime Minister Shinzo Abe, the Chief Executive of the Northern Ireland Tourist Board Alan Clarke has said that the G8 summit has provided another major step forward for tourism.

“David Cameron could not have done a better PR job for Northern Ireland when he spoke about how beautiful it is, how warm hearted the people are and how impressed everyone has been,” said Alan.

“The Prime Minister said that it’s only when you come here and see for yourself do you realise how beautiful it is, and we clearly hope that his words will encourage many more people to do just that.

“The Northern Ireland Tourist Board and our partners will be working hard to capitalise in the coming months and years on the Prime Minister’s ‘infomercial’ for Northern Ireland.

“Added to this we had the Japanese Prime Minister Shinzo Abe warmly declaring that he should have come and visited Northern Ireland much earlier which is more immensely valuable PR,” he added.

As the world’s leaders head back to their respective countries, the Northern Ireland Tourist Board Chief Executive has said the success of the G8 will create a tourism legacy that will last for years and has shone more positive light on Northern Ireland and our ability to stage world class events.

On Monday night NITB hosted a large reception for international journalists attending the G8 at an event at Castle Coole to brief them on what Northern Ireland has to offer.

Alan added: “Tourism makes a vital contribution to the Northern Ireland economy, welcoming approximately 3.9 million visitors per year and contributing £613 million to the local economy as well as sustaining over 40,000 jobs.

“The global media attention on the G8 has been unprecedented and has provided yet another opportunity to showcase Northern Ireland on a local, national and international stage, raising our profile and continuing to help change perceptions.

“I’m delighted with the success of the G8 and believe it will not only further stimulate our sense of local pride but also create a catalyst in the ongoing development of Fermanagh and Northern Ireland as an attractive and high quality destination.

“2012 proved to be a spectacular 12 months for Northern Ireland with the success of the ni2012 Our Time Our Place campaign placing us on the world stage.

“This has continued in 2013 with events such as Derry~Londonderry UK City of Culture and the G8 showcasing us to a global audience as a positive place to live, work, visit, study, invest and do business,” he added.