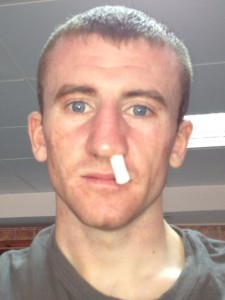 BELFAST boxer Paddy Barnes has been left devastated after having to pull out of his European Championship final today through injury.

Barnes was due to fight Russia’s David Ayrapetyan.

However, on Saturday morning he tweeted that his nose was broke and couldn’t fight.

“Out of the final today!

It is a massive blow after Belfast pair of Barnes and Michael Conlan were guaranteed to bring home silver medals from the European Championships after they won their semi-finals in Belarus.

Former world champion Wayne McCullough tweeted from his home and base in Las Vegas: “Paddy Barnes OUT of light fly final. Failed medical this morning with a fractured nose.

“Brutal for him. Sorry mate.”

Fly-weight Conlan defeated Russian Ovik Ogannisian on a split-points decision to set up a final against Welshman Andrew Selby on Saturday.

Despite constant pressure from his Russian opponent, the Mullingar man found time and space to pick him off with a lovely variety of shots, while also showing great movement to avoid being caught.

Quigley overcame a fierce challenge from Yevhen Khytrov, who won the middleweight gold at the 2011 World Championships.

The 22-year-old came out strong, attacking the Ukranian world champion to take all three rounds for the best win of his career..

Despite a stoppage for Barnes to receive treatment on a badly bloodied nose, the 26-year-old’s work-rate was too much for his young opponent.

Olympic bronze medallist Conlan dominated his semi-final and was rarely troubled by Ogannisian but surprisingly one judge gave the fight to the Russian, with the score 30-27, 28-29, 30-27.