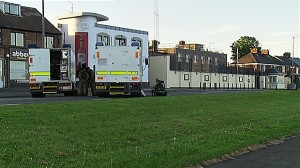 DETECTIVES have launched an investigation after a security alert at a Co Antrim police station was declared a hoax.

Carrickfergus station was evacuated on Tuesday evening after a member of the public carried a suspicious object into the inquiries office.

Police are now trying to establish who left the package and if there was a malicious intent.

A number of local residents in the Larne Road area were also moved from their homes and officers from the bomb squad were tasked to investigate.

Police said a controlled explosion was carried out and the object was found to be a hoax.

All roads have now been reopened and residents have been allowed to move back in.

Local DUP councillor Charles Johnston said the alert caused a lot of disruption to traffic, businesses and people in the area.

“I understand somebody walked into the station at around 7.50pm with a package and left it there.

“A lot of people walk along the seafront on a good evening like this and the businesses – the bar next door has been evacuated, people taken from their homes and traffic has been re-routed right around the town.

“It’s caused a lot of disruption,” he added.