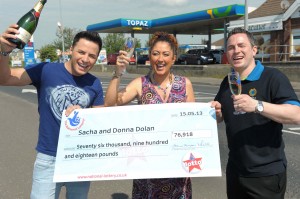 IRELAND’S Eurovision contestant Ryan Dolan didn’t get the voting numbers to bring the title back home.

But brother Sacha was singing all the way to the bank when he discovered his numbers came up in the Lotto draw.

It was disappointment for Strabane singer Ryan Dolan when Ireland came last in the Eurovision Song Contest.

However, it was a trip to Sweden that brother Sacha will never forget for a much happier reason – as he discovered he had won £76,000 on the Lotto!

Sacha was in Sweden with other members of the Dolan family to cheer on Ryan, who was representing Ireland in the global song contest, when the winning numbers 4, 5, 6, 20, 30, 35 and the bonus 34 were drawn on Wednesday 15 May 2013.

Sacha soon discovered he had matched five numbers and the bonus ball to scoop a cool £76,908 and a further £10 when he matched three numbers with an additional ticket. 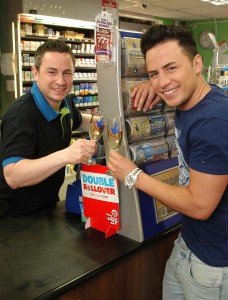 The winning tickets were actually purchased when Sacha, aged 40, was testing out a new cash payback system that he had just installed in the Costcutter store that he owns in Strabane, County Tyrone.

To check that his new card payment system worked, Sacha bought £10 of Lucky Dips for the Wednesday night draw.

The following morning, Sacha gave the tickets to his wife Donna before heading off to Eurovision in Sweden and the rest, as Sacha explains, is history.

“I thought nothing of it as I gave Donna my tickets and asked her to check them when she got a chance,” said Sacha.

“We were too excited about Ryan performing in Eurovision to even think twice about the possibility of winning.

“We were enjoying a family meal at an Italian restaurant in Malmo on the Friday evening when Donna called me and told me that we’d won.

“I didn’t believe it and asked her to take a photo of the ticket and send it to me. I checked the photo against the Lotto numbers online, then checked it again and again and again.

“When it finally sunk in that I really had won, well then we ordered up some champagne and had a bit of a party.

“At a tenner for a vodka and coke, and £100 for a bottle of champagne, it’s just as well that I won the lottery,” he joked.

Sacha claims that the only thing he’s ever won in his life to date was a bottle of wine that he was ‘too young to drink’ and has promised ‘not to go mad’ with his winnings. 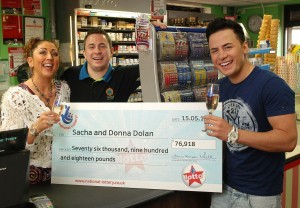 “I’ll maybe take a couple of holidays but I won’t be going too mad,” he said. “I think I’ll be fairly sensible with the money.”

Brother Ryan Dolan,who despite the disappointment of Eurovision has enjoyed a lot of success around Europe with his single ‘Only Love Survives’, was definitely cheered up by Sacha’s good news.

“We’re all delighted for Sacha and Donna and it was definitely a nice consolation prize,” said Ryan.

“Things have turned out so well, there’s no reason to get down. Performing in Eurovision was all about getting my name out there and it’s done the trick,” he said.