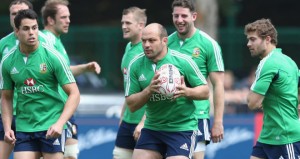 BRITISH and Irish Lions assistant coach Andy Farrell is confident that humidity will not be an issue for the squad in their opening tour match against the Barbarians in Hong Kong.

The temperature is expected to be around the 86 degrees Fahrenheit mark – with humidity of up to 90 per cent – for the clash at Hong Kong Stadium.

Four water breaks have been planned to combat the issue of dehydration, while there will be cooling fans at the side of pitch.

The Lions will also have special “ice jackets” to wear at half-time, however, Farrell insists the squad will be fine.

Ulster hooker Rory Best, who was a last minute call up, doesn’t even make the replacements bench.

The only Irish man to feature is Lions caption Paul O’Connell.

“We’ve coped really well with the conditions in training, in the morning and afternoon when it’s been really hot, so it won’t be a problem tomorrow,” he said.

“It’s just common sense in this heat and humidity to do the right thing. The water breaks will be fast.

“They’ve got ice vests that they can use. They can take their top off at half-time and put them on to cool their body down.

The Lions have opted to give the players who have been with the squad since their first meeting the first chance to impress against the Barbarians.

That means the players from Leinster, Ulster and Leicester – who only teamed up with the squad on Sunday due to club commitments – miss out, although Tom Youngs, Jamie Heaslip, Cian Healy and Jonny Sexton will provide cover on the bench.

Sam Warburton misses out due to a slight knock to the knee, with Paul O’Connell taking over the captaincy in his absence, while Gethin Jenkins and Sean O’Brien are also being monitored by the Lions medical staff.

The Barbarians have named their strongest line-up for the historic encounter.

The BaaBaas, who have opted against their famed ‘team bonding’ sessions following their 40-12 thumping by England, have called in the likes of Nick Evans, Sergio Parisse, Dmitri Yachvili and Martin Castrogiovanni for the clash.

Parisse will skipper the side, which features three uncapped players in Elliot Daly, Sam Jones and Jared Payne.

The match will be the second time the Lions have played the BaaBaas, with the iconic sides having clashed in 1977 as part of the Queen’s Silver Jubilee celebrations. The Lions won that match 23-14.

HOW THE TEAMS WILL LINE OUT: