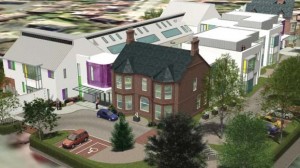 A NEW hospice building in north Belfast has been given a cash boost by Belfast City Council.

In a cross-party decision Belfast City Council has committed to donating £500,000 towards the redevelopment.

Thousands of people and their families have been cared for in the Somerton Road property over the past 30 years and it is no longer fit for purpose.

The major redevelopment of the Victorian building is expected to cost £11m.

The rebuild will provide every patient with an en suite room, access to the garden areas and space for their loved ones to stay.

The charity has been campaigning to raise money for the project, and

She said: “We are grateful and humbled by the spirit of generosity and care demonstrated by the councillors at Belfast City Council.

“We have still a long way to go but are encouraged by the energy and generosity of the people of Northern Ireland to help the hospice and support our services.

“Our vision to replace the old Victorian building at Somerton Road with a state of the art facility is now a step closer to becoming a reality,” she added.

The cash is a further payment from the council, whose Strategic Policy and Resources Committee confirmed in March they would donate £200,000 to the appeal.

“Having operated out of an old converted building for many years it has now brought forward plans for purpose-built premises at Somerton Road.

“It is entirely right and proper that Belfast City Council should give our support to this important development. I was delighted that my proposal to donate £250,000 each year for the next two years was passed with the full support of the Council.”

Said the DUP MLA: “Over the years I have had occasion to personally witness the caring work of the hospice, supporting families during the serious and terminal illness of a loved one. I know how deeply appreciated this work is.

“Now, in its hour of need, the Hospice needs our support to help bring its vision to reality. I am very pleased that Belfast City Council has approved this donation towards securing new purpose-built premises in north Belfast.”

The hospice is hoping to raise £3m from a public appeal via their Buy a Brick project, which needs to sell 100,000 bricks to fund the project.