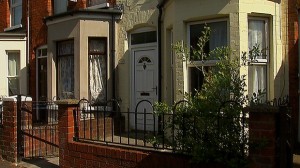 A CHINESE woman whose home was targeted by race hate thugs with a pipe bomb is planning to flee for the safety of her baby daughter.

Jing Jing Lin is packing up her belongings and moving out of Melrose Street in south Belfast after rascists left the bomb outside her front door.

The bomb later detonanted and homes in the street were evacuated and the road was closed while police and Army technical officers investigated reports of an explosion.

Police say the “viable” pipe bomb only partially exploded easily have the mother and toddler inside.

The remains of the pipe were later taken away for further forensic examination.

Mum Jing Jing Lin was at home with her 14-month-old daughter when the device detonated.

“We were in the house, she was sleeping. I heard a bang and saw a small bag,” said Ms Lin who added that she very sad at th attack.

Evacuated residents, including the victim and her 14-month-old daughter went to Morton Community Centre in Lorne Street for several hours as the scene was examined.

Ms Lin and other residents were allowed back into her home at around 2.40am on Saturday morning.

Detectives are working on the theory that the attack was racially motivated.

The attack has been condemned by police chiefs and local politicians.

PSNI area commander Chief Inspector Mark McEwan said: “It is only by good fortune that members of the public were not killed or seriously injured last night.

“Whoever left this device has shown complete disregard for the safety of the local community.”

Alliance south Belfast MLA Anna Lo, who has been the victim of race hate crimes in recent years, said it was fortunate no one was killed.

“I am shocked that somebody would put lives at risk by carrying out such an attack. We should just be thankful that nobody was hurt.

“The people responsible have no regard for the well being of others.”

Detectives at Musgrave Street PSNI station have appealed for anyone with information about the pipe bomb attack to contact them on 0845 600 8000.