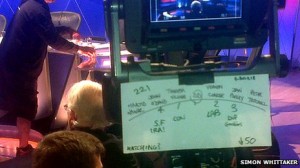 THE BBC is at the centre of a political storm over a floorplan for a Question Time programme referred to John O’Dowd as ‘Sinn Fein/IRA’.

Now the Sinn Fein Education Minister has demanded an “immediate explanation” from the BBC.

The clip board was attached to a camera in the Belfast studio detailed the position of the panellists.

The show was broadcast on Thursday night hosted by veteran broadcaster David Dimbleby.

Mr O’Dowd said he had agreed to take part in the programme on the basis of “respect and equality”.

“After the programme was finished I was made aware of the floor plan pinned to a camera branding me a member of ‘SF/IRA’.

“This was not on the floor plan previously shown to me before filming,” he said.

Mr O’Dowd described it as a “serious issue”.

“The ‘SF/IRA’ tag was one created at the height of the unionist murder campaign against my party colleagues in the late 1980s and early 1990s. It was an attempt to justify attacks on Sinn Fein members and our families,” he said.

“For the BBC to adopt the tag 20 years into a peace process is beyond belief.

The picture was taken and tweeted By Simon Whittaker, who was a member of the audience.

“My issue is that it is more about impartiality- we were told this is your show, we’re asking the questions you want to be answered and the key is it’s impartial,” Mr Whittaker said.

“This is 2013, yet the DUP are advertised as the goodies and Sinn Fein the IRA”

“I’m sure it wasn’t done maliciously and maybe it was by people who don’t understand the context of Northern Ireland.

“But it wasn’t what you would expect to see.”

Mr O’Dowd said: “We lodged a formal complaint with the BBC in Belfast seeking an immediate explanation for the sign and what action is to be taken against those behind it.

“We await with interest their response. But one thing is for sure we will not let the BBC simply sweep this issue under the carpet.”

Question Time is produced by independent company, Mentorn Media for the BBC.


One Response to BBC IN ‘SF/IRA’ QUESTION TIME ROW