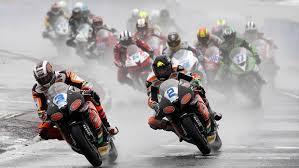 Heavy rain during the Supersport race at the NW 200

PETER ROBINSON has said the Stormont Executive will do all it can to ensure the North West 200 is a more flexible event in future.

The First Minister made the remarks after Saturday’s racing had to be abandoned due to heavy rain.

It was the second time in three years that bad weather has stopped the NW200.

Race director Mervyn Whyte has called for a change in road closing orders so the event can coincide with favourable weather conditions.

Only one race took place on Saturday before the decision was made to call off the event.

On Saturday, Mervyn Whyte said: “The weather has beaten us and I am absolutely gutted – we have done a massive amount of work and had three road sweepers out, but is it is impossible to keep it clear.

“If we had got a break in the weather for an hour we could have done something.

“I feel for all those who have come here today and the thousands who have supported us.

“It’s just a pity we haven’t a roads closing order to allow things to change – it needs to be flexible and there has to be movement from the government.

“It’s a disgrace the amount of money this event receives compared with other events.

“The government needs to start putting effective financial backing into this event. We receive little or nothing.”


One Response to FIRST MINISTER PLEDGES HELP FOR NW 200